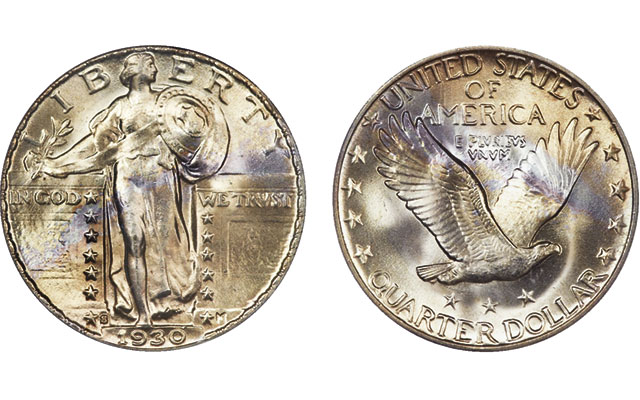 The 1930-S Standing Liberty quarter is a solid choice for someone seeking an example of the design for type purposes and this MS-66 Full Head, CAC, example brought $2,350.

The story: Beyond rarities, the Gardner collection is full of solid coins that are nice for the grade, making them well-suited for type collections. This 1930-S Standing Liberty quarter, from the last year of issue for the type, is from an issue that was well-produced and “comes nice.” Graded by Professional Coin Grading Service as MS-66 Full Head, with CAC label, it sold for $2,350.

The coin presents particularly well in images, and Heritage describes the surface as follows: “Soft shades of light golden color engulf this heavily frosted, beautifully preserved Premium Gem, with a diagonal ribbon of lavender and ice-blue stretching across each side.”

Bidders agreed that the piece had exceptional eye appeal for the grade and it sold for $2,350. For comparison, Heritage sold two other examples of this issue in this grade recently, both certified by PCGS and with a CAC sticker, for much less. On April 27, 2014, one brought $1,292.50 and a month earlier a different one sold for $1,380.63.