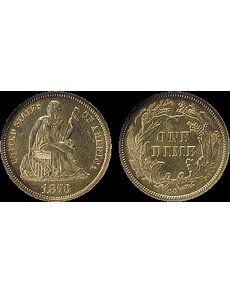 A complete set of Carson City Mint coins, including the unique 1873-CC Seated Liberty, No Arrows dime (shown), is scheduled to be auctioned by Stack’s Bowers Galleries at the ANA’s World’s Fair of Money in August. The set will be on display at the FUN convention in Orlando, Fla., in January.

The unique 1873-CC Seated Liberty, No Arrows dime will be offered at auction in August as part of a complete collection of Carson City Mint coinage.

Stack’s Bowers Galleries will auction the “Battle Born Collection,” only the second complete 111-piece set of Carson City Mint coinage ever assembled. The only other complete set belonged to Louis E. Eliasberg Sr., which was sold in three auctions in 1982, 1996 and 1997.

The Battle Born Collection is the only complete Carson City Mint set to be sold during a single auction, according to Stack’s Bowers Galleries. The collection will cross the block during the Rarities Night Auction at the Stack’s Bowers Galleries official auction of the American Numismatic Association World’s Fair of Money in Philadelphia. The entire auction will take place Aug. 1 to 11.

The Battle Born Collection will be displayed in its entirety during a public viewing opportunity at the Stack’s Bowers Galleries table at the FUN Convention in Orlando, Florida, Jan. 5 to 8.

The spotlight coin of the collection is the unique 1873-CC Liberty Seated, No Arrows dime, graded Mint State 65 by Professional Coin Grading Service and bearing the Eliasberg pedigree. It is the only example known to exist.

Mint records indicate that 12,400 1873-CC Seated Liberty, No Arrows dimes were struck, but all are presumed melted with the exception of the one surviving example, which was sent to the annual Assay Commission in Philadelphia.

The last public purchase of the 1873-CC Seated Liberty, No Arrows dime was in July 2004, when it sold for $891,250 at a Bowers and Merena auction. The purchaser was Rusty Goe, who in December of that same year sold the coin for an undisclosed amount to the owner of the Battle Born Collection, thus completing that collector’s set.

The consignor, who chooses to remain anonymous, has been assembling this collection since the early 1990s. The set was named by Goe after the consignor’s home state of Nevada, “the Battle Born State.”

The consignor has been working hard to upgrade and complete the entire collection since 2001, according to Stack’s Bowers.

According to Stack’s Bowers Galleries, the collection now includes 20 stand-alone finest known coins, 30 pieces tied for finest known, three stand-alone second-finest known coins, and 19 coins tied for second-finest known, resulting in 72 of the 111 coins in the collection being in the top two tiers of condition census. Each coin in the collection is certified by PCGS or Numismatic Guaranty Corp., and many hold the Certified Acceptance Corp. designation. High-profile pedigrees from the set include the aforementioned Eliasberg, as well as R. Henry and Emory May Norweb, James A. Stack, Harry W. Bass Jr., James Fairfield and others.

“This is a truly historic event, not only for Carson City coin collectors, but for all of numismatics,” said Chris Napolitano, president of Stack’s Bowers Galleries.

“A collection of this magnitude comes around maybe a few times in a generation, and it is our honor and privilege to be the chosen auction house to bring this incredible set of Carson City Mint coinage to the collecting public,” Napolitano said.

Goe said: “This collection will set a new standard of excellence in numismatics, and pays great homage to the famed Carson City Mint. It is not only Carson City collectors who will appreciate this set, but enthusiasts of gold coins, Liberty Seated coins, Morgan silver dollars, and just the overall legacy and lore of their origin.”

Additional highlights of the Battle Born Collection include:

? 1876-CC Coronet gold $5 half eagle. PCGS MS-66. The finest Carson City Mint gold coin of any date or denomination. Formerly in the Eliasberg and Bass collections.