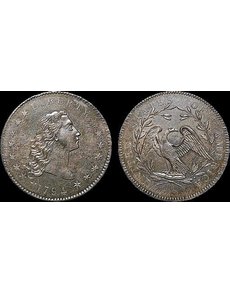 The unique 1794 Flowing Hair, Silver Plug silver dollar, to be offered in January as part of the Cardinal Collection, last sold in a private transaction for a record $7.85 million in 2010. The coin is graded PCGS Specimen 66 and stickered by Certified Acceptance Corp. as exceptional for the grade. 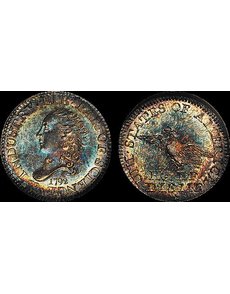 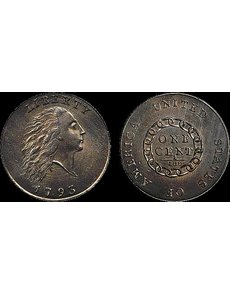 The 1793 Flowing Hair, Chain, AMERICA, No Periods cent is certified MS-65 brown by PCGS and stickered by CAC. 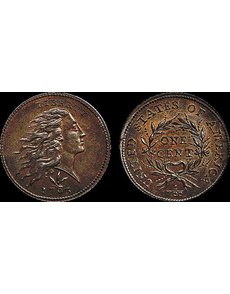 Previous
Next
The finest known 1794 Flowing Hair silver dollar, which brought a record $7.85 million for a single coin in a private transaction in 2010, is scheduled to cross the auction block in January.
Certified as Specimen 66 by Professional Coin Grading Service and stickered by Certified Acceptance Corp. as being exceptional for the grade, the 1794 Flowing Hair, Silver Plug silver dollar coin is perhaps the highlight of the portion of the Cardinal Collection to be offered as part of Stack’s Bowers Galleries New York Americana Sale Jan. 22 to 24.
The event’s Rarities Night, during which the Cardinal Collection is offered, will be held Jan. 24 in the Le Parker Méridien Hotel, 119 W. 56th St. All other sessions of the auction will be held at Stack’s Bowers Galleries, 123 W. 57th St., in Manhattan.
Among the other top highlights featured in the Cardinal Collection are the finest known 1792 half disme, graded Mint State 68 by Numismatic Guaranty Corp.; a 1793 Flowing Hair, Chain, AMERICA, No Periods cent graded PCGS MS-65 brown and stickered by CAC; and a 1793 Flowing Hair, Wreath, Vine and Bars cent graded PCGS MS-69 brown.
Early U.S. focus
The Cardinal Collection Educational Foundation, based in Sunnyvale, Calif., was established in 1999 with private donations as a nonprofit entity to foster numismatic education via online and print media as well as public displays.
Central to the collection, assembled by Martin Logies, are the nation’s two earliest silver coins — the 1794 silver dollar and the 1792 half disme.
Logies — a numismatic researcher, early dollar specialist, and author of The Flowing Hair Silver Dollars of 1794 — operates and represents the foundation and is curator for the collection.
The collection is complemented by an assemblage of large cents that hold the No. 1 spots in multiple categories on both the PCGS and NGC Set Registry charts.
The content of the Cardinal Collection is continually changing. Hundreds of other U.S. coins are in the collection, along with foreign coins that circulated contemporary to them. The concentration is on early U.S. issues.
First U.S. silver dollar?
The collection’s 1794 Flowing Hair, Silver Plug silver dollar, Bolender 1, (The Early United States Dollars from 1794 to 1803 by Milferd H. Bolender), is the only example containing a silver plug among the 140 to 150 examples of 1794 dollars Logies estimates are extant.
The silver plug was added to the underweight planchet at the U.S. Mint in Philadelphia to bring the planchet up to standard weight.
In total, 1,758 silver dollars are recorded as struck on a hand-turned screw press at the Philadelphia facility Oct. 15, 1794, the only day of production for dollars that year.
Logies contends the silver for the 1794 dollars was provided by David Rittenhouse, the first U.S. Mint director.
The 1794 Flowing Hair, Silver Plug dollar was purchased May 14, 2010, by the Cardinal Collection Educational Foundation from Stephen L. Contursi, president of Rare Coin Wholesalers, Irvine, Calif.
Contursi has long contended the Silver Plug dollar represents the first example of the Flowing Hair silver dollar struck in 1794, although no documented evidence supports that claim. Logies claims, however, that significant circumstantial evidence backs the contention.
Previous owners of the coin include numismatic luminaries Col. E.H.R. Green, Will W. Neil, and Texas newspaper publisher Amon Carter Sr.
Exceptional rarities
The 1792 half disme being offered is the finest example certified by either PCGS or NGC. It is attributed as Judd 7 in United States Pattern Coins, Experimental & Trial Pieces by J. Hewitt Judd, edited by Q. David Bowers.
The example to be offered is suggested to have had a provenance beginning with ownership by Rittenhouse.
Closely related to the proposed coinage of 1792 at the U.S. Mint in Philadelphia, in a Nov. 6, 1792, address to Congress, President George Washington refers to the 1792 half disme as a regular issue of the U.S. Mint.
Some 1,500 examples were reportedly struck.
The pertinent segment of Washington’s address is quoted in the 1998 book, Federal Half Dimes: 1792-1837 by Russell J. Logan and John W. McCloskey.
Two popular stories concerning production of the 1792 half dismes have fueled strong demand among advanced collectors.
One is that Washington contributed some of his own silverware for melting to be converted into coin blanks. The other is that the Liberty portrait on the coin’s obverse is based on a likeness of the first president’s wife, Martha.
One of only four PCGS gem-certified 1793 Flowing Hair, Chain, AMERICA, No Periods cents, Sheldon 2 (Penny Whimsy by William H. Sheldon), the example in the Cardinal Collection has among its previous owners noted large cent collector Roy E. “Ted” Naftzger Jr.
Naftzger, Dr. Sheldon, and Chicago beer baron Virgil Brand were among the previous owners of the 1793 Flowing Hair, Wreath cent, S-9, with the Vine and Bars ornamentation on the edge.
Other highlights
Other highlights to be offered from the Cardinal Collection include these cents:
??1794 Liberty Cap, Head of 1793 cent, S-18B, PCGS MS-64 brown, CAC.
??1794 Liberty Cap, Head of 1795 cent, S-67, PCGS MS-67 red and brown.
??1795 Liberty Cap, Plain Edge cent, S-78, PCGS MS-65 brown.
??1797 Draped Bust, Reverse of 1797, Stems cent, PCGS MS-65 red and brown, CAC.
??1801 Draped Bust, 1/100 over 1/000 cent, S-221, PCGS MS-63 red and brown.
??1835 Coronet, Head of 1836 cent, Newcomb 14 (United States Copper Cents 1816-1857 by Howard Newcomb), PCGS MS-65 red and brown, CAC.
??1839 Coronet, Booby Head cent, N-11, PCGS MS-66 red and brown, CAC.
Redeployment of assets
Logies said the decision was made to liquidate this segment of the Cardinal Collection now because the 94 coins to be offered have served their educational purposes for the foundation.
Logies said also that collectors and dealers were making significant inquiries for the material, at prices that could not be ignored.
Logies said net funds generated from the January sale will be reinvested into other collecting areas.
The 94-coin offering includes the two silver rarities, large cents by date and major variety, small cents by type, and a number of cent patterns that bridge the gap between large and small cents.
For more information about the New York Americana Sale, contact Stack’s Bowers Galleries toll free on the West Coast at 800-458-4646 or on the East Coast at 800-566-2580. Email the firm at info@stacksbowers.com or visit the company’s website at www.stacksbowers.com.