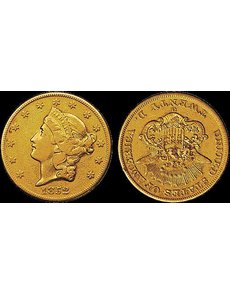 The reverse of this 1852-O Coronet gold $20 double eagle is counterstamped upside down and incuse by gold pen manufacturer Dawson, Warren & Hyde from New York. The coin will be offered at Stack’s Bowers Galleries’ Baltimore sale.

An 1852-O Coronet gold $20 double eagle counterstamped by gold pen manufacturer Dawson, Warren & Hyde is one of the many U.S. coin highlights in Stack’s Bowers Galleries’ Nov. 14 to 16 auction in Baltimore.

The auction is being held in conjunction with the Whitman Baltimore Coin and Collectibles Expo at the Baltimore Convention Center.

The 337 lots being offered at 6 p.m. Nov. 15 represent the firm’s Rarities Night auction, and include the counterstamped double eagle. The evening’s lots also include such rarities as a recently discovered 1797 Draped Bust, Reverse of 1797 cent; a 1794 Flowing Hair half dollar; an 1808 Capped Draped Bust gold $2.50 quarter eagle; an 1879 Flowing Hair gold $4 Stella; and a 1921 Saint-Gaudens double eagle.

The three-day sale also includes Part I of the Ted L. Craige Collection of early U.S. copper coins, and the John “Jack” Royse Collection of Colonial and Early American Coins.

Craige immersed himself in collecting, researching and writing in the 15-year period leading up to his untimely death in 1971 at age 51.

Royse, 85, a retired professional golfer, assembled his collection over a span of 60 years.

The counterstamped 1852-O Coronet gold $20 double eagle, Lot 3301, is identified in the auction lot description as Brunk D-182, as cataloged in American and Canadian Countermarked Coins by Gregory Brunk.

The host coin is graded Very Fine 20 and according to the lot description, the piece was subjected to cleaning sometime in its past.

The countermarked double eagle is from the estate of Stephen L. Tannenbaum who, according to the lot description, considered this piece his most cherished among some 600 different counterstamped pieces he collected over several decades.

The double eagle is counterstamped upside down in six lines in the center of the reverse with DAWSON WARREN & HYDE’S “TIP TOP” PEN.

Numismatist Q. David Bowers, who has collected counterstamped large cents since 1955, has, according to the lot description, an 1850 Coronet cent counterstamped IRA C. HASKINS TIP TOP PEN EN, the only one he has ever seen. Presumably, it is related to the counterstamped double eagle.

“Gold pens made of oroide and other gold-appearing alloys were very popular in the 1850s and were offered by various manufacturers,” according to the auction lot description. “The Tip Top Pen was widely advertised in America circa 1857-1860 and was featured by jewelers, stationers, and sellers of fancy goods.”

The 1794 Flowing Hair half dollar, graded Very Fine 35 by PCGS, is attributed as Overton 101a in Early Half Dollar Varieties: 1794-1836 by Al C. Overton and Donald Parsley. The Flowing Hair design was launched in late 1794 with 23,464 pieces believed struck of this date. It is identified in Overton as a Rarity 4, meaning it has an extant population of between 81 and 200 examples.

The 1808 Capped Draped Bust quarter eagle represents a one-year type. The BD-1 variety, as cataloged in Early U.S. Gold Coin Varieties: A Study of Die States, 1795-1834 by Harry W. Bass Jr. and John W. Dannreuther, was struck from the only known dies designed and engraved by U.S. Mint Engraver John Reich. With an original mintage of 2,710 pieces, approximately 125 to 150 examples exist today.

The example offered is graded MS-61 by Numismatic Guaranty Corp.

After the 1808 production, no more quarter eagles were produced until 1821, when the Capped Head design was introduced. At that time, the coin’s diameter was reduced to 18.5 millimeters, from 20 millimeters.

The 1879 Flowing Hair, Reeded Edge Stella in the auction is cataloged as Judd 1635 in United States Pattern Coins, Experimental & Trial Pieces by J. Hewitt Judd and edited by Q. David Bowers. The piece in the auction is graded PCGS Proof 62. A reported 15 examples were struck.

U.S. Mint Assistant Engraver Charles E. Barber designed the obverse and reverse dies following a request from Rep. John Adam Kasson, who believed that a gold coin based on the metric system and of the $4 value might facilitate international commerce.

The 1921 Saint-Gaudens double eagle in the auction is graded NGC MS-61. Most of the reported mintage of 528,500 coins were melted in the 1930s. Of the 150 or so remaining examples known, many have been lightly circulated or are in low Mint State grades, according to the auction lot description.

For more information on this and future auctions, contact Stack’s Bowers Galleries on the East Coast toll free at 800-566-2580 or on the West Coast at 800-458-4646. Email the firm at info@stacksbowers.com or visit the company’s website at www.stacksbowers.com. ¦