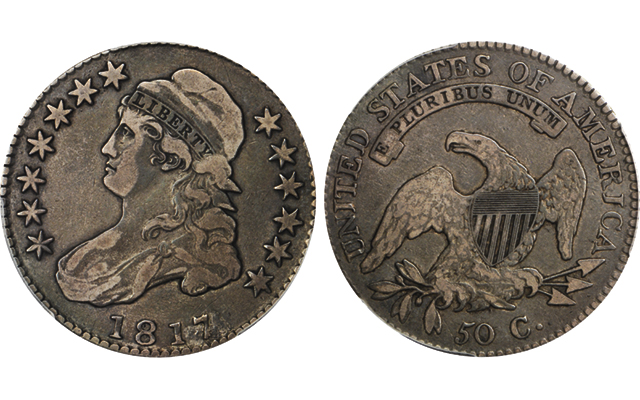 Stack's Bowers Galleries will offer during its sale the first week of August in conjunction with the American Numismatic Association's World's Fair of Money what is confirmed as the 11th known example of the 1817/4 Capped Bust half dollar, illustrated.

What numismatic experts have confirmed as the 11th known example of 1817/4 Capped Bust half dollar will be offered at auction in August by Stack's Bowers Galleries.

The recent discovery, certified in March by the Professional Coin Grading Service as Very Fine Details — Tooled, will be part of a Stack's Bowers auction held in conjunction with the American Numismatic Association World's Fair of Money in Rosemont, Ill.

Although the tooling is in the area around the 7, traces of the underlying 4 are still visible.

As of 2005, only seven examples were known of the rare overdate, but since then, four more examples have been confirmed, including the current example.