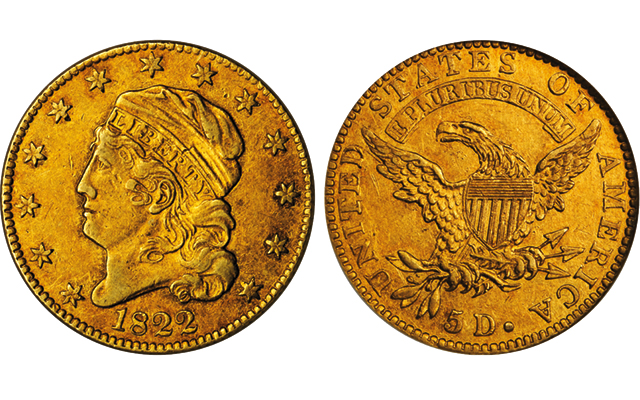 The Pogues’ 1822 Capped Head gold $5 half eagle is one of just three examples extant and the only one available to collectors. The coin last sold at auction in 1982. 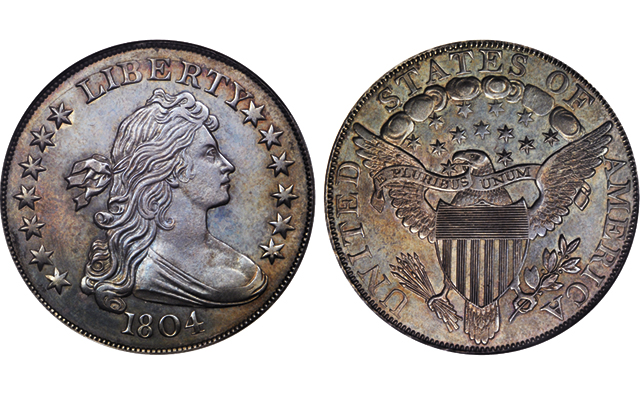 The Pogue’s acquired this 1804 Draped Bust silver dollar from the Walter H. Childs Collection Sale in 1999.

The first and second auctions of The D. Brent Pogue Collection will be conducted by Stack’s Bowers Galleries on May 14, 2015, and Oct. 1, 2015, in New York City. All sales will be held in New York City.

The other projected auctions dates are:

The collection emphasizes United States coins of the early years, 1792 to the late 1830s, but includes many other treasures as well.

“Future announcements will be made relating to displays, previews, books and, of course, the contents of each event,” according to Christine Karstedt, executive vice president for the firm.

The collection was assembled over more than three decades by Dallas real estate magnate A. Mack Pogue and his son, D. Brent Pogue.

The collection is laden with rare and unique coins, including many that are the finest known of their date and variety.

The Sultan of Muscat Class I 1804 silver dollar, a nearly perfect Gem Proof coin, is far and away the finest known and set a record when the Pogue family bought it at the Walter H. Childs Collection Sale in 1999.

In the entire history of American numismatics there have been only two times when an 1822 half eagle has sold at auction: at the Harlan P. Smith Sale in 1906 and at the Louis E. Eliasberg Sr. United States Gold Coin Collection in 1982. The Eliasberg example of the coin, the finest of three known, was sold into the Pogue Collection.

The other two examples are in the National Numismatic Collection in the Smithsonian Institution, making the Pogue specimen the only collectible example and unique in that regard.

Q. David Bowers, who has worked with the Pogue family for decades, is preparing three books in connection with the auctions, drawing upon assistance from staff experts and researchers.

The first is titled The 1822 Gold Half Eagle: Story of a Rarity. This will contain, not only information on the U.S. Mint and era in which these coins were made, but also an extensively documented history and biography of every person and company known to have owned or handled one of the three coins, with separate chapters on each of the three specimens.

The second volume, with Bowers as the lead author, in collaboration with Brent Pogue and input from experts on the Stack’s Bowers Galleries team and others, will be The D. Brent Pogue Collection of American Coinage: The Definitive Sylloge. This will include images and descriptions of more than 600 coins, their grades, pedigrees, and numismatic significance.

The third numismatic work will be an extensively illustrated volume on the most popular, most eagerly sought coins in the collection.

According to Brian Kendrella, SBG president, “In just a few weeks we will be unveiling a special section of our website dedicated to this collection and to special events and previews as they are scheduled.”

For more information on the sale of the D. Brent Pogue Collection, contact Christine Karstedt by email.

More information will be posted regularly as available at the Stack's Bowers website.