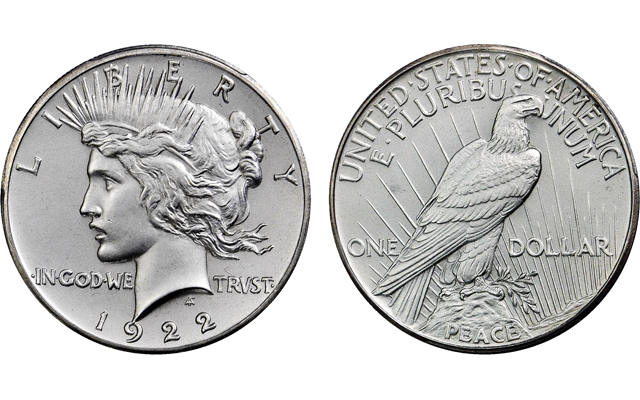 A 1922 Peace, High Relief dollar graded Proof 66 has been called “The best rendition of the Peace Dollar to leave the Mint.” Images courtesy of Stack's Bowers Galleries.

Stack’s Bowers Galleries is gearing up for its Rarities Auction  May 20 in New York City.  The sale follows the May 19 auction with Sotheby’s featuring 128 coins from the D. Brent Pogue Collection.

The Rarities Auction features a diverse range of material across 109 lots including coins from the United States and around the world, paper money, medals, and other interesting objects. The individual lots range from the first lot, a 1918 24-cent “Inverted Jenny” airmail stamp that is encased in a locket from when it was a gift from famed numismatist Col. Edward H.R. Green to his wife, to an exceptional 1907 Saint-Gaudens, Ultra High Relief double eagle.

Here is one coin with a great story to tell:

The last week of December in 1921 was extremely busy at the Philadelphia Mint as it managed to strike just over 1 million 1921 Peace dollars for circulation.

The Stack’s Bowers catalog entry cites Roger Burdette, who found that Morgan took a 1921-dated hub and changed the date to 1922, while making other more subtle changes.

As cited in the auction catalog, Burdette opines, “Overall, these 1922 proofs — Morgan’s touched-up version — may be the best rendition of the Peace dollar to leave the mint: they had sharp lettering, detailed modeling of the hair and good delineation of the eagle. These were likely first made during the last week of December but almost certainly before January 8, 1922.”

Stack’s Bowers' census in the catalog accounts for just 11 examples.

The finest known is graded Proof 67 by Professional Coin Grading Service and was offered in Ira & Larry Goldberg’s June 2014 pre-Long Beach auction where it sold for $458,250. The example to be offered May 20 is graded PCGS Proof 66 and is illustrated multiple times in Burdette’s 2005 book Renaissance of American Coinage: 1916-1921 and his 2008 book A Guide Book of Peace Dollars.  It carries a presale estimate of $250,000.