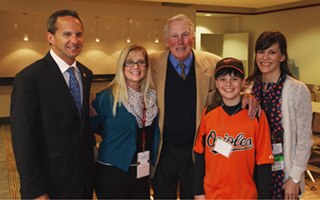 Cole Bank got to meet Brooks Robinson, center, March 27 at the Whitman Baltimore Coin & Collectibles Expo. Also in the photo, left to right, are Jeff Idelson, president of the National Baseball Hall of Fame and Museum, and Lori H. Kraft and Michelle Hudson of the Whitman Expo staff. 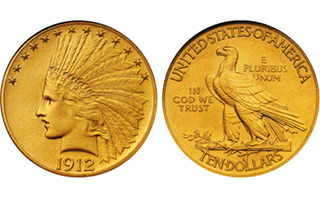 The display of coins from the Saddle Ridge Hoard of U.S. gold coins, the appearance of Hall of Fame third baseman Brooks Robinson and opening day sales by the U.S. Mint of 2014 National Baseball Hall of Fame commemorative coins combined to help bring record attendance March 27 during the first day of the Whitman Baltimore Coin & Collectibles Expo.

Mary C. Burleson, president of Whitman Publishing Co., said attendance during the entire expo March 27 to 30 was higher than for previous installments of the convention.

“Our attendance numbers, for both dealers and free public attendance, exceeded our numbers for the prior year spring Expo,” Burleson said. “Dealers reported a very active wholesale and retail business being conducted on a sold-out bourse floor. The Saddle Ridge Hoard exhibit, the United States Mint exhibit, and the launch of the [National Baseball Hall of Fame] commemorative coin program helped to create one of the most exciting shows in years.

Stack’s Bowers Galleries’ March 26 to 29 expo auction, which featured the Cherry Blossom Collection and other consignments, brought total prices realized from the live floor sessions of more than $11.8 million. The total includes the 17.5 percent buyer’s fee added to the final closing hammer price of each lot won.

The auction sessions were led by the $1,116,250 realized for a gold Nobel Peace Prize medal awarded to Argentinean Carlos Saavedra Lamas in 1936.

Among the additional highlights offered was the Cherry Blossom Collection of 39 U.S. gold coins of the 19th and 20th century, in Proof and Mint State condition. Those coins collectively realized nearly $2.7 million.

The coin is one of an estimated 40 to 50 examples of the 1912 Proof gold $10 eagle extant from a reported original mintage of 83 coins.

“These 1912 Proof eagles were all struck in the Satin or Roman finish which imparts nearly infinite microscopic facets to the surfaces of the coin that twinkles and flash like shiny stars when examined under the light,” according to the auction lot description.

Another highlight from the collection was an 1880 Coronet gold $20 double eagle graded NGC Proof 66 Ultra Cameo that brought $235,000. Stack’s Bowers noted in a post-auction press release that it was the highest price ever for a Proof Coronet double eagle of the Type III subtype in this grade. Type III refers to coins produced from 1877 through 1907 exhibiting U.S. Mint Engraver William Barber’s reverse modifications. The most visible of those changes is the denomination appearing as TWENTY DOLLARS.

Kraft said it wasn’t disclosed to Whitman Expo officials until March 24 that Robinson would be appearing at the show, and not until March 25 that the Mint would definitely have the Baseball Hall of Fame coins for sale at the show.

Collectors, dealers and the general public clamoring to obtain examples of the Proof and Uncirculated coins waited in some instances for up to five hours March 27 to secure one of the coins from the U.S. Mint’s inventory.

Twelve-year-old collector Cole Bank from Vienna, Va., was first in line at the Mint’s booth, buying one each of the Proof coins: a Proof 2014-W Baseball half eagle, Proof 2014-P Baseball silver dollar and Proof 2014-S Baseball copper-nickel clad half dollar.

The certificate of authenticity for the Proof gold coin was signed by J. Marc Landry, the U.S. Mint’s acting associate director of sales and marketing and Philadelphia Mint plant manager, as being the first coin sold.

Later the same day, Cole, dressed in Baltimore Orioles attire, had the opportunity to meet with Robinson.

Cole almost didn’t get to attend the expo or meet Robinson, according to Cole’s father, Ron Bank. His father explains what transpired that day in a Letter to the Editor this week (see Page 15).

Bank concludes, “My wife and I just can’t say enough about how wonderful the Mint and Whitman staff were to Cole. He has repeatedly said that this was one of the best days of his life.”