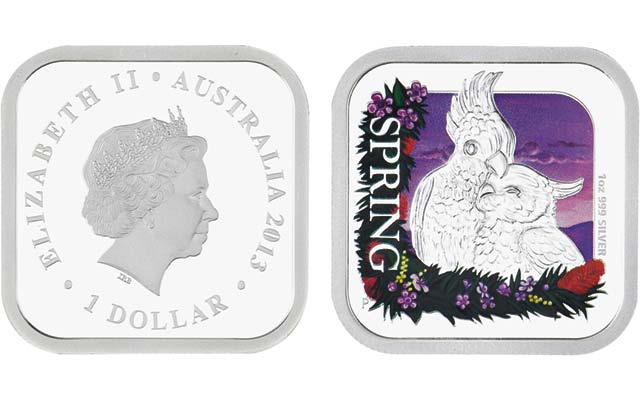 Australia issued a series of dollar coins in 2013 for each of the four seasons. This is the Spring coin, with cockatoos and flowers. 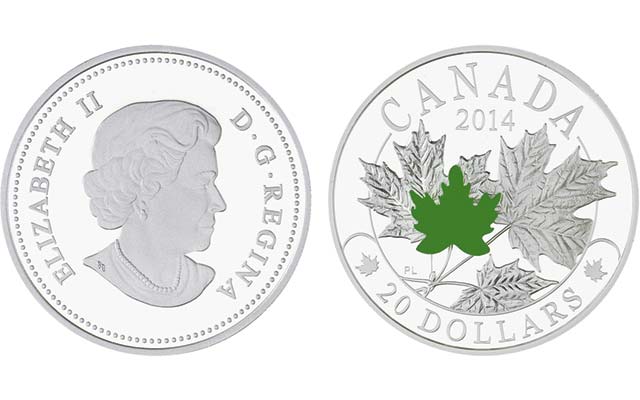 Trees are greenest in spring. This 2014 Canadian Maple Leaf silver $20 coin is enhanced with a maple leaf carved out of green Canadian jade gemstone. 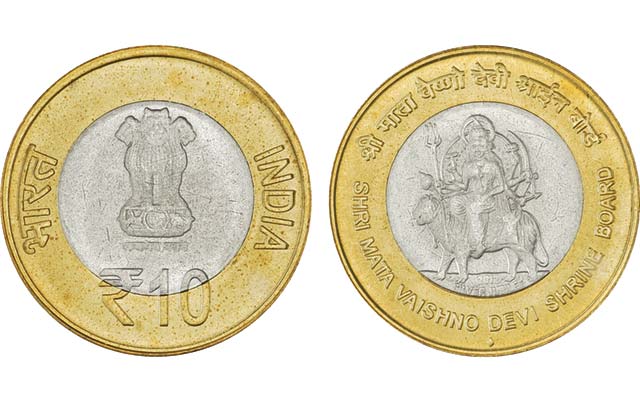 The figure on the reverse of this ringed-bimetallic 10-rupee coin from India is Vaishno Devi, a manifestation of the Hindu mother goddess. Her nine-day festival is held every spring at the start of the Hindu calendar in the month of Chaitra (March to April). 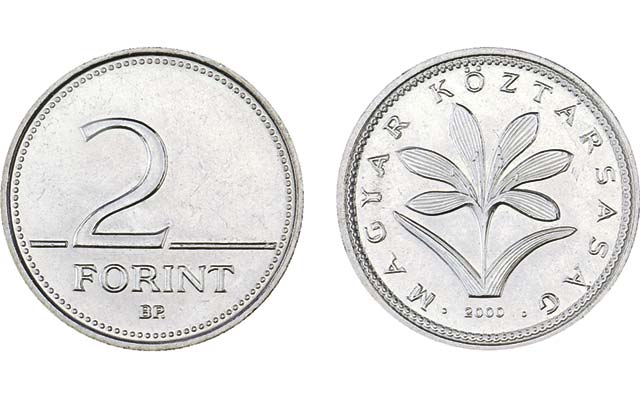 The small 2-forint coin from Hungary is like a little bit of springtime on a coin. It features a Hungarian crocus (Colchicum hungaricum), spring’s first flower and a sign that winter is over. 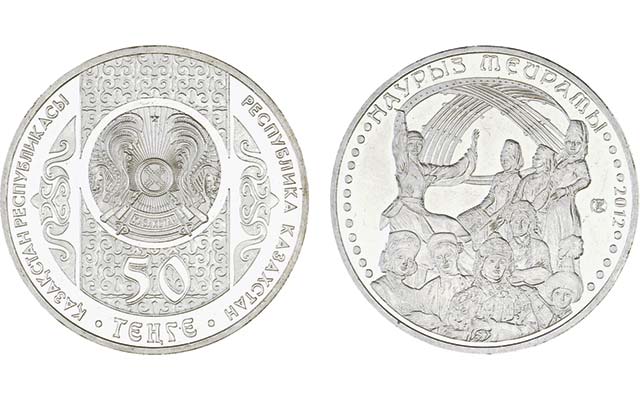 Nauryz or “New Day” is a very important spring equinox holiday for Kazakhs. Not officially celebrated while Kazakhstan was part of the Soviet Union (1926 to 1988), the holiday has returned in a big way, as depicted on this Kazakh 2012 50-tenge coin. 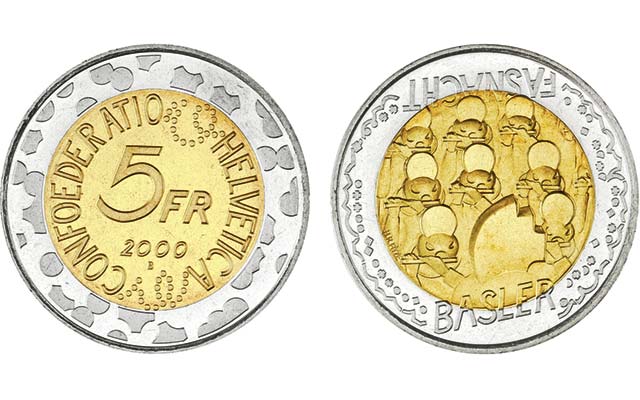 Whether known as Fastnacht, Carnival, Mardi Gras or Fat Tuesday, the day before Lent begins also celebrates spring’s imminent arrival. Fastnacht is a very big deal to the Swiss, featuring giant parades, like the one depicted on a 2000 ringed-bimetallic 5-franc coin. 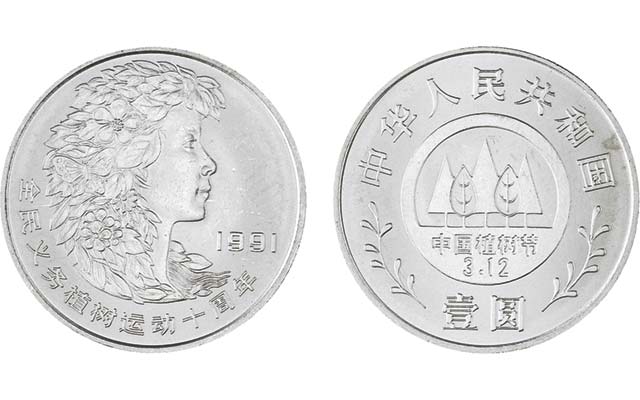 Since 1981, China has made tree planting a legal requirement every March 12. Except for children and the elderly, all citizens must plant at least three trees. A set of three 1991 coins celebrated that Arbor Day. 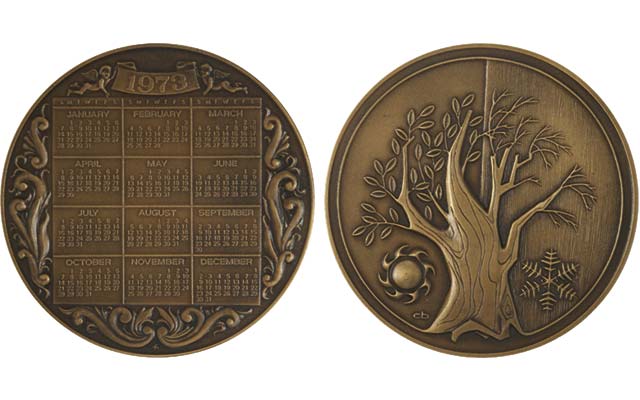 On one side of this 1973 art medal is a Four Seasons tree calendar. The “Tree of Time” by sculptor Clayton Blaker shows a tree in spring and in autumn, with a sun and a snowflake representing summer and winter.

Fortunately for snowbound world coin collectors, numismatic spring is year-round. If it isn’t quite warm yet where you are, this selection of springtime themes may make the waiting a bit easier.

Spring takes place from September to November in Australia. The climate as well as the calendar is quite unique due to the continent’s size, shape, location, and ocean currents. And the climate varies a lot from one region to another. In temperate Sydney, summers are warm, sometimes hot, and winters are mild (63 to 70 degrees Fahrenheit).

In 2013, the Perth Mint issued one colorful square Proof silver coin to represent each of the seasons.

The Spring coin utilizes springtime flora, and the animals that best represent spring everywhere: birds. The reverse is dominated by white cockatoos, colorful banksia and wax flowers, and a dramatic violet sunset.

In the last decade there has been a trend by some world mints to embed genuine gemstones into coin designs. Canada chose bright green jade to represent springtime on a 2014 Majestic Maple Leaves $20 coin. Embedding a carved 3-D maple leaf made of Canadian jade into the silver coin is just one of many ways that Canada has embellished the collector versions of its Maple Leaf issues over the past 27 years. Other treatments include a Reverse Proof finish, mint-coloring, gilding, enameling and high relief.

Spring has always been the inspiration for festivals, holidays and cultural activities. It means the return of life, color and warmth, good reasons for a celebration. India has many festivals on its calendar, thanks in large part to the faith of the Hindu population.

A 2012 ringed-bimetallic 10-rupee commemorative coin features Vaishno Devi seated on a cow. She is a manifestation of the Hindu mother goddess and is honored every spring in March or April at the start of the Hindu calendar. The Vasanta Navaratri Festival lasts for nine days.

Hindu pilgrims honor Vaishno Devi year-round, not just in springtime, by visiting her temple in the Kashmir province. One of the holiest places in all of India, it receives about 8 million people annually.

If you live in Kazakhstan, the spring equinox means a multi-day celebration called Nauryz or “New Day.” This ancient celebration encourages people to forgive those who have wronged them so as to begin the new year on a positive note. Town squares fill with fireworks , songs, performances and traditional games.

In 2012, Kazakhstan issued a 50-tenge coin to commemorate the spring festival of Nauryz, which features celebrants in traditional clothing.

Mardi Gras or Carnival is a Christian celebration marking the end of Winter and the beginning of Lent and Spring. In this country, Mardi Gras is synonymous with New Orleans, but in Europe, people are more likely to think of Switzerland. It is referred to as Fastnacht (Fast Night) or Fat Tuesday by the Swiss, but the holiday lasts for six days. People don costumes and masks, sing, dance, and eat greasy sausages and fried desserts. The wildest celebrations are usually found in Lucerne.

A 2000 ringed bimetallic 5-franc coin from Switzerland honors Fastnacht by showing part of a parade on the obverse. These giant parades look chaotic to tourists because participants can march in any direction they choose.

In addition to warmer weather and festivals, spring is all about the rebirth of nature, especially flowers. A small coin from Hungary from 2000 is like a little bit of springtime on a coin. The 2-forint piece has a Hungarian crocus (Colchicum hungaricum), spring’s first flower. The Hungarian crocus blooms in February and March, and is a national symbol of Hungary. It is also a protected flower species.

Trees herald spring too, and since 1981 have enjoyed national attention in China every March 12. Citizens are legally required to plant at least three trees on Chinese Arbor Day, or pay someone else to do so in their place. Only people over 60 and under 11 are exempt from the law.

China issued three different 1-yuan coins in 1991 to celebrate its Arbor Day. The most interesting design features the profile of a woman having “hair” made entirely of leaves, flowers, and a butterfly.

Medals also celebrate Spring, like the 1973 bronze 76-millimeter calendar medal from the private Franklin Mint in Pennsylvania. On one side of the art medal is a numerical calendar and on the other, a tree calendar. The high relief “Tree of Time” by sculptor Clayton Blaker depicts half of the tree dressed in its spring finery while the other half is leafless, representing autumn. Summer’s symbol is the sun at the tree’s base, and winter is a snowflake.

Want to know more about collecting by topic? Here are other options!