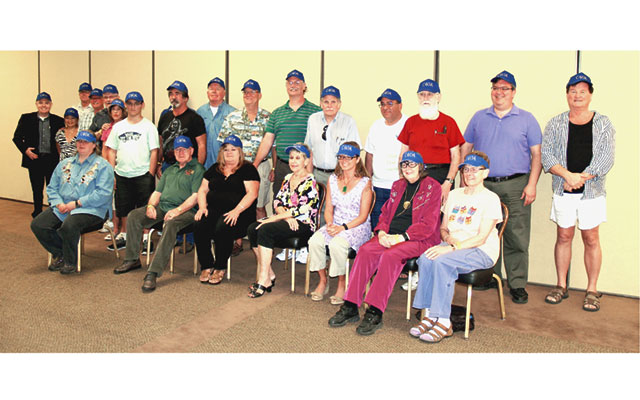 Members of the Carson City Coin Collectors of America model their club caps and visors during the group’s Aug. 22 regional meeting in Nevada.

Maya Jones has worked at Southgate Coins since 2007. She has been a member of the Carson City Coin Collectors of America since 2008. She has contributed articles to the club’s journal, Curry’s Chronicle.

Rusty Goe, president of the Carson City Coin Collectors of America, reminded the 25 attendees at the club’s regional meeting in Carson City, Nev., on Aug. 22, 2014, that their club is the only one dedicated to a specific U.S. Mint and its coins. He told them that since the inception of the club in 2005, its journal Curry’s Chronicle has published 306 articles covering at least 38 different topics, all related to the Carson City Mint and its coins. He said these and future articles will leave a lasting legacy of pertinent information about “CC” coins for another generation of collectors.

Meetings such as this, held by specialty numismatic clubs, help keep the passion energized in members who attend. Enthusiasm and lively discussion dominated the meeting, as attendees took turns sharing about their favorite coins, their primary focus points, and their experiences in pursuit of the hobby.

One member, Tony Arnold, told about his recent acquisition of an 1872-CC Coronet gold eagle, which is the 102nd coin in his collection as he attempts to build a complete 111-piece set of both the gold and silver issues from the Carson City Mint.

Another member, Bill Dunn, showed his wholehearted support of the club by giving caps and visors with the club’s pet name “C4OA” on them to everyone in attendance.

Mark Archambault personified club devotion by spearheading the regional meeting from his home in New Hampshire. He received an engraved wood plaque and many handshakes and pats on the back for his noble efforts.

Michael Parrott expressed his gratitude for how, as someone who never considered himself much of a writer, he has had numerous articles published in the C4OA’s journal. Other members agreed with Parrott that having their articles published in Curry’s Chronicle is one of the many benefits of belonging to the club.

Mike Wagner, who because of his work schedule had missed the past three meetings, said he was glad he could make it to this year’s event. He collects coins encased in third-party grading service slabs not usually encountered. He showed everyone his Mint State 1890-CC Morgan, Tail Bar silver dollar in an oversized PCGS Regency holder.

The meeting, scheduled for three hours, extended into overtime and lasted for more than four hours as members were determined to make the most of this once-in-a-year happening. Aside from the camaraderie with cohorts, all in attendance agreed that there is a rich educational element at these meetings that is not available to them anywhere else.

Membership in a specialty club such as the C4OA provides opportunities for hobbyists to connect with other like-minded individuals, enjoy times of show-and-tell and stimulating conversation, and build lasting relationships. All of the members who attended this year’s meeting in Carson City received heavy doses of all of the above.

For more information about the Carson City Coin Collectors of America, please visit the club’s website at www.carsoncitycoinclub.com, or call 775-322-4455. One-year membership dues, which cover a three-issue subscription to Curry’s Chronicle, cost $30.