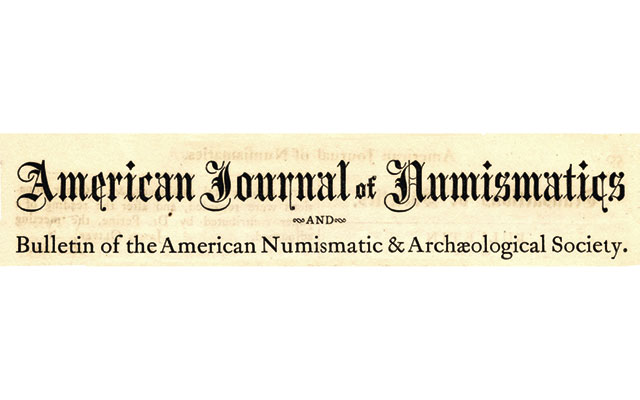 Masthead of the informative American Journal of Numismatics, which made its publishing debut in 1866.

It was expected that silver and gold coins, long hoarded by the public, would reappear in 1865. This did not happen. Citizens were distrustful of money, especially of legal tender notes and national bank notes, which could not be exchanged for coins of precious metals, but only for other notes. In circulation that year were copper-nickel cents, bronze 2-cent coins, and copper-nickel 3-cent coins.

It would be years until silver and gold coins were available at banks in the East and Midwest.

Auctions were held frequently. The two leading catalogers were W. Elliot Woodward of Roxbury, Mass., well-respected for his in-depth knowledge of numismatics and history, and Edward D. Cogan of New York City, whose expertise was sufficient to get by. E.L. Mason Jr., a dealer, issued his own combined news magazine and price lists, often with comments criticizing his competitors.

Collectors on their own had to evaluate coins, their grades, prices, and overall desirability.

In July 1866, the American Numismatic & Archeological Society launched the American Journal of Numismatics. It was filled with news of auctions, new coin designs, and other events, feature articles on many subjects, questions and answers, and more.

In response to an inquiry, in the first issue the editor advised that the best collections in the country were those of Charles Bushnell, Joseph J. Mickley, and Matthew A. Stickney.

The new Shield 5-cent coin inspired this comment plus a swipe at Mint officers for privately selling rarities for their own profit: “Though collectors have long ceased to regard the true issues of the ‘government copper-head factory,’ better known, perhaps, as the United States Mint, as of any value, they may be interested in the information that the ugliest of all known coins, the new five cent piece, is out, as oysters are served in some places ‘in every style.’ ”