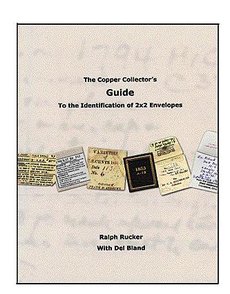 The Copper Collector’s Guide to the Identification of 2x2 Envelopes by Ralph Rucker, with Del Bland, concentrates on the various paper envelopes used to house copper coins.

In numismatics, various specialties have come to the fore in the past two generations. This started in a large way in the early 1960s when federal coins zoomed to unprecedented high prices, making many of them unaffordable.

Various other areas were explored, including tokens, medals, paper money and Colonial coins. Specialized groups were formed by enthusiasts.

Today, niche specialties are as strong as ever. One of the most obscure, yet interesting, of such came to my attention recently when I received in the mail a nice book, color-illustrated and on fine paper, The Copper Collectors Guide to Identification of 2x2 Envelopes, by Ralph Rucker with the assistance of Del Bland (long-time copper cent specialist).

Many of you remember the small paper envelopes with the flap, measuring 2 inches by 2 inches, that were the standard of the hobby in the 20th century. They are still seen now in some instances, but they are increasingly rare.

Go back to a coin show 30 years ago and cases would be filled with paper envelopes with coins sitting on top. Today a case can be filled side to side with plastic slabs without a piece of paper in sight.

Ralph spent 147 pages illustrating paper envelopes used over the years by different collectors and dealers. Most of these bear hand-written inscriptions, but others are typed.

The study begins with John W. Adams, whose superb collection of 1794 cents was sold by my firm Bowers and Ruddy Galleries back in 1982. Since then, John has been a fine friend. His envelopes on yellow stock are carefully hand lettered.

Those of Willard C. Blaisdell, a collector from New Jersey who was a familiar at conventions in the 1950s and 1960s, feature a general description on the top line, Sheldon attribution (Early American Cents and later, Penny Whimsy by William H. Sheldon), grade and a pedigree.

Walter Breen wrote in pencil on his envelopes, information about the variety, die state, and rarity.

Dozens of other collectors and dealers are covered, their envelopes being evocative of the enthusiasm they had when building their collection.

These paper envelopes themselves have little monetary value to anyone other than a copper cent specialist. But, how interesting they are to contemplate! I personally knew or still know the vast majority of the envelope writers.