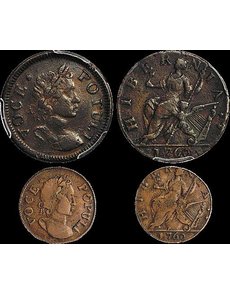 The unique Nelson 17 variety of 1760 Voce Populi copper, top, most closely resembles the Voce Populi variety identified as Nelson 4, Zelinka 2-A, right, which shares a reverse die with this new discovery. The obverse of the new variety is from an entirely new die.

A previously unpublished variety of 1760 Voce Populi halfpenny has been confirmed by experts in Colonial numismatics and certified Extremely Fine 40 by Professional Coin Grading Service.

The unique variety is scheduled to be offered at auction in August by Stack’s Bowers Galleries in conjunction with the American Numismatic Association World’s Fair of Money in Philadelphia. The coin is part of a series that originated in Ireland and circulated in Colonial America.

“Voce Populi” translates into English as “voice of the people.”

Nor is it listed in Jerry Zelinka’s detailed analysis of the series, “The Enigmatic Voce Populi Halfpenny of 1760,” published in the October 1976 issue of The Colonial Newsletter.

The new variety has been assigned the catalog number of Nelson 17.

John Kraljevich, an expert in Colonial numismatics who is author of the monthly Coin World column “Colonial America” and a numismatic consultant for Stack’s Bowers, cataloged the new variety for the auction.

According to Kraljevich, the Nelson 17 variety most closely resembles the Voce Populi variety identified as Nelson 4 and Zelinka 2-A. The established variety shares a reverse die with the new discovery, but the obverse on the new coin is from an entirely new die, Kraljevich said.

“The head punch is quite tall, like Nelson-4, but shows distinctive details: thinner and more pointed leaves in the laurel, an extra curlicue curl between the two hair ribbons and the back of the neck, a more Roman style nose and higher, more prominent lips,” according to Kraljevich’s auction lot description for the Nelson 17 variety.

“The reverse appears to be in a later state here, with the olive spray in a more abraded state, perhaps through die lapping or just wear. The quatrefoils are less crisp here than on Nelson-4, and the flaw left of the date appears more prominent.”

Kraljevich said that before the discovery of the Nelson 17 variety, the Nelson 16 variety was the rarest of the Voce Populi halfpence, with six examples known as of the last auction appearance in a 2008 sale conducted by Colonial Coin Collectors Club (website www.colonialcoins.org/). That Very Fine 25 example sold for $7,150, with the 10 percent buyer’s fee.

The Stack’s Bowers Galleries researchers do not know the identity of the discoverer of the new variety.

Vicken Yegparian, vice president of numismatics for Stack’s Bowers in the firm’s New York offices, said June 13: “The coin came to us through a dealer intermediary, so I’m not sure who the actual owner is. The owner had researched and knew what he had, but was looking for expert confirmation of the variety, which is why they came to Stack’s Bowers Galleries.”

Kraljevich, in a June 14 email to Coin World, said: “As to the discoverer, the consignor ... identified all the salient points of the new variety. I don’t know who he is, but he deserves credit as the discoverer. Vic looked at it, then asked me to confirm it, which only took about 10 minutes. It’s really pretty distinctive.”

The Voce Populi pieces are from a series of coppers produced in Ireland; a number of the pieces ended up in Colonial America.

Wide disagreement exists among numismatic experts over whether the pieces were intentionally produced for widespread circulation in the Colonies.

Diagnostics on the coppers tie them to Ireland, and they are popularly collected as a colonial issue.

The obverse of the Voce Populi halfpenny coppers displays a male portrait wearing a laurel wreath as a personification of the people. The motto VOCE POPULI appears around.

On the reverse, a seated figure of Hibernia appears at center, with HIBERNIA inscribed above and, below, the date 1760 in exergue.

According to Zelinka, several varieties are most easily distinguished by the different punctuation or designs that accompany the legends.

Some of the halfpenny copper pieces have the letter P on the obverse; researchers have never ascertained the purpose of the letter.

The series is popular with today’s collectors due in large part to its affordability and is included in A Guide Book of United States Coins by R.S. Yeoman, better known as the “Red Book.”

Well-circulated examples of common halfpenny varieties in Good condition can be found for less than $100.

For comparison, two common examples of Voce Populi halfpennies graded Extremely Fine 45 by PCGS sold at a Jan. 7 Heritage auction for $489.90 and $517.50 each. ¦