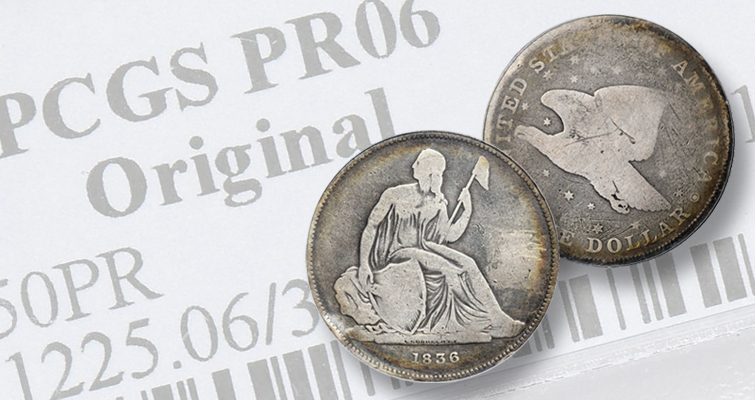 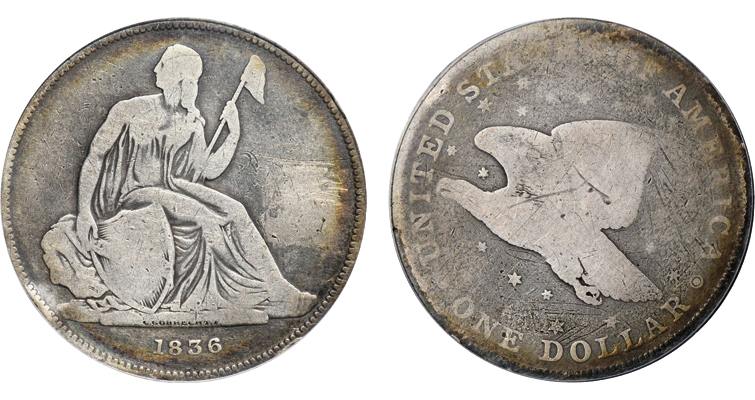 The well-circulated nature of this 1836 Gobrecht dollar suggests it likely spent quite some time as a pocket piece. 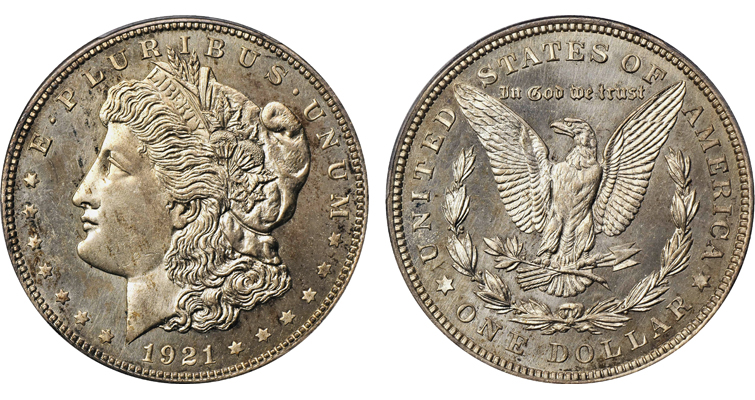 While it is popularly referred to as a “Zerbe Proof” after hobby promoter Farran Zerbe, PCGS grades this 1921 Morgan dollar Specimen 66 and terms it a “Zerbe Special Strike”; it also carries a green CAC sticker.

Stack’s Bowers Galleries’ November 2021 Baltimore Auction — official auction of the Whitman Coin & Collectibles Expo — will be held after the convention on Nov. 22 and 23 in Costa Mesa, California.

The 151-lot Nov. 23 Rarities Night session has a very unusual 1836 Gobrecht dollar graded Proof 6 by Professional Coin Grading Service. The Proof designation identifies its original production method, while the numerical grade recognizes the heavy wear on both sides, perhaps indicating that it was carried as a pocket piece for many years.

The design elements including the date remain clear, while “a minor rim ding at 7 o’clock on the latter side is noted, as are wispy scratches on the reverse, but all of these features are easily forgiven in light of how much handling this coin obviously endured,” the cataloger points out.

Gobrecht dollars dated 1836 to 1839 are curious items that have long held interest for type collectors, interested in just one, and for specialists, who have identified die markers and other characteristics to distinguish original strikings from restrikes made from the late 1850s through the early 1870s. This coin is listed as Judd 60 in the pattern reference and is classified as an Original, with a plain edge and Die Alignment 1, having the eagle flying upward.

All examples are scarce. As Stack’s Bowers writes regarding the dollars designed by engraver Christian Gobrecht, “The rarity and significance of the Gobrecht dollar as a type has resulted in strong numismatic prices for examples throughout the grading scale, and it is seldom that the budget minded collector has an opportunity to bid on an attractive coin at a relatively affordable level.”

Until the Gobrecht dollar, the silver dollar denomination was last struck in 1804 (with dies of an earlier date). Contemporary reports state that 1,000 Judd 60 Original dollars were struck in 1836. Despite their inclusion in the pattern references, the “Red Book” identifies it as a circulation issue. Stack’s Bowers Galleries wrote in its offering of another example of the issue, “The Mint even conducted something of a press campaign on the new coin, as descriptions of ‘a new dollar of our own Mint’ were published in New York as early as December 15, 1836, and spread nationwide over the course of the following month.”

Farran Zerbe has made some numismatic headlines recently, when the American Numismatic Association announced that it would remove that numismatist’s name from its highest award. Zerbe was ANA’s president from 1907 to 1909 and was a bit of a shady character. He was influential in the creation of the Peace dollar in 1921 and used his connections to have some special pieces made for his own interests. He requested that special 1921 Morgan dollars be struck at the Philadelphia Mint that would serve as de facto Proofs for the year.

Stack’s Bowers will be offering a 1921 Morgan dollar, now termed a Zerbe Special Strike, graded Specimen 66 by PCGS with a green CAC sticker

While the coin is unofficially known as a “Zerbe Proof,” these are not true Proof strikes like the Proof 1878 to 1904 Morgan dollars that were available for sale directly to collectors. Instead, they are special strikings that are not identified as Proofs in Mint records, but struck from highly polished dies.

The cataloger explains, “The present example displays the well known diagnostics of the type with the aforementioned semi-reflective fields and scattered die polish lines from the die preparation process.”

Perhaps 100 to 125 survive from around 150 that were struck at Zerbe’s request, and this one is among the finest.

Some are more skeptical of the possible Proof status of the Zerbe pieces. Q. David Bowers wrote in his most recent edition of A Guide Book of Morgan Silver Dollars, “In the view of the writer, Zerbe Proofs have no basis in numismatic fact or history,” adding, “It seems highly unlikely that these were produced as Proofs for collectors.” Still, regardless of their status, they are more appealing than regular issue 1921 Morgan dollars and highly desired by collectors today, especially in the absence of normal Proofs of the year.
Connect with Coin World:
Sign up for our free eNewsletter
Access our Dealer Directory
Like us on Facebook
Follow us on Twitter 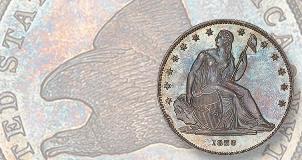 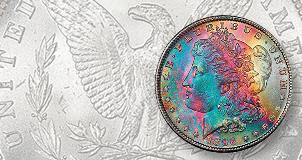 Market Analysis: All colors of the rainbow on 1896 Morgan dollar