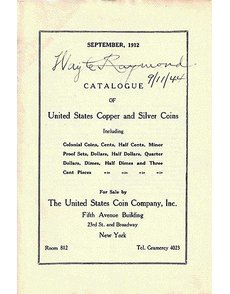 Autograph of dealer Wayte ?Raymond, known affectionately in the hobby as “The Great? Wayte.”

Coin dealers usually follow the 11th Commandment: “Thou shalt not speak evil of another dealer.”

Only rarely does a dealer break that commandment, and even more rarely does he record his transgression.

The best example is Wayte Raymond’s 1941 flyer, The Truth About Rare Coins. “The Great Wayte,” they called him, punning on both his considerable knowledge and his ponderous poundage.

But in 1941, he was “The Irate Wayte,” fed up with advertisements by less scrupulous competitors offering to buy coins that they knew were unavailable.

Raymond pulled no punches when he wrote, “a large part of such advertising is fraudulent, there can be no doubt … a careful analysis of a few of these ads will convince any fair-minded person of their flim-flam quality.”

He detailed a dozen examples that he thought misled the public.

One that especially got up Raymond’s nose was the specialty of his “ex,” B. Max Mehl.

For a few months in 1912, Raymond and Mehl were the odd couple among coin dealers, the improbable pairing of a schoolmarm and a used car salesman. The partnership ended quickly, but the hard feelings lingered.

Referring to Mehl’s many ads to buy 1913 Liberty Head 5-cent coins for what was big money in 1941, Raymond snorted: “Fifty dollars is the price usually offered for this coin, and it might just as safely be $500 or $5000, because there aren’t any in circulation.”

Mehl, of course, made the $50-for-a-nickel offer to sell copies of his Star Rare Coin Encyclopedia. Raymond made it clear that Max was included among the scoundrels to whom he was referring: “In order to sell their coin books, they have sought to give the uninformed public the impression that there are rare coins in circulation, and that they may be giving away a fortune every day in making change.”

Other dealers were offering $100 for an 1894-S Barber dime, to which Raymond retorted, “… the chances of finding one are … at least a billion to one, and no one wants to waste much time or money on the short end of a billion to one shot.”

Then there were ads for the 1866 Seated Liberty, No Motto quarter dollar: “The average person is ignorant of the fact that there is only one specimen in existence, and that every legitimate dealer knows just who owns it,” Raymond wrote.

According to Raymond, legitimate dealers also hated ads offering to pay $50 for Indian cents: “… their ’phones ring incessantly, people have accumulations of Indian head cents and when told they are only worth 1 cent each, they conclude the dealer is a burglar trying to steal their rare coins and frequently tell him so.”

Today’s legitimate dealers will recognize that kind of phone call. More than 70 years after it was written, there is still a lot of truth in The Truth About Rare Coins.