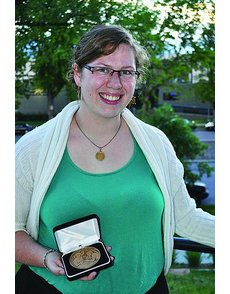 Almost two years ago, when I was president of the Ames Coin Club in Iowa, a student at my university emailed me about joining our local organization. She was an avid coin collector and liked working with young hobbyists.

I encouraged her to join because several children attend our club meetings once a month at our senior services center. We bring young and old collectors together with the magic and allure of coins.

We also emphasize the importance of youth numismatics by beginning our club meetings 15 minutes early to focus on children, featuring several fun games.

The Iowa State University student who emailed me was none other than Hannah Powell of Strawberry Point, Iowa, who was named the 2012 Outstanding Young Numismatist of the Year by the American Numismatic Association.

While we cannot take credit for Hannah, as she had other mentors, Ames Coin Club members share her passion not only for the hobby but for inspiring the next generation of young collectors.

Here are some of our activities and practices, which you might try in your hometown or local club:

Do a version of the Penny Roll Game, hiding a Wheat Reverse cent valued at $100 in one of several unmarked rolls and then auctioning or selling those rolls at a club meeting. Or just consider giving them away at a birthday party. Nothing is as exciting as a “find,” even a planted one. (We put a Wheat cent worth $5 to $10 in each of our rolls so that no one is disappointed.)

Consider hosting a literary contest about coin collecting, such as that conducted by the ANA.

Our club does a version of the ANA literary contest, giving coins that have a special history to each of our young collectors, such as a Mint State 1883 Liberty Head, No CENTS 5-cent coin or a 2004-D Wisconsin, Extra Leaf Low quarter dollar, each valued at $50 to $100.

Young members then research the coin and do a presentation for the club. We decide whether the presenter can keep the coin, based on his or her research. That teaches the value of research, an element vital to the hobby.

Ours also is a visual, artistic and historic hobby. You can inspire young collectors to photograph rare coins or create a collage from discarded auction catalogs.

One way to spark a passion for coins is to have handy a 1787 Fugio cent, purportedly designed in part by Benjamin Franklin.

It’s possible to buy a rough or corroded Fugio cent for $150 to $200. Place the raw coin in a child’s palm and conjure old Ben by telling the story of the Fugio, as if the Founding Father were alive in the room. The very feel of that coin can be a lightning rod, sparking the magic that many of us still possess.