Advertising on embossed cards as a promotional vehicle 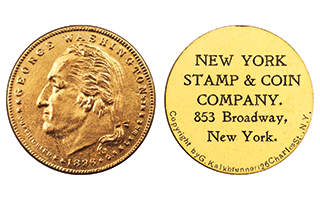 The dealers address indicates it was issued between 1889 and 1903. The token belonged to the late Steve Tanenbaum, and was sold by Dave Bowers, who is launching a full-color catalog with the Token and Medal Society of this neglected species of American exonumia.

In April 1920, he patented a metal key ring identification disk, and in October 1922, he patented a distinctive bottle cap. His other inventions ranged from a cuff link holder, to a toy marionette, to a bottle cap replacing tool, to a bejeweled ladys hair barrette.

In 1895 Augustus G. Heaton noted the coin dealership advertised on the store card in "A tour Among the Coin Dealers," published in an 1895 issue of The Numismatist.

According to Heaton, "The New York Stamp and Coin Company is located in a spacious room on the second floor of a large building on Union Square." Partners were H.P. Smith and David Proskey.

Harlan Page Smith, born March 18, 1839, was a wholesale fruit dealer before associating with numismatist Henry G. Sampson as Smith & Sampson, a short-lived numismatic auction firm, circa 1880 to 1881. From 1881 to 1887, Smith conducted 21 more auction sales on his own account, before entering into a partnership with Proskey in the later year.

David U. Proskey, born Dec. 12, 1853, had begun in the coin and mineral business as a 20-year-old in 1873. He cataloged for J.W. Scott and was editor for a dozen years of the firms monthly The Coin Collectors Journal. He also conducted several auctions on his own account before partnering with Smith in 1887.

The new partners conducted several of the eras most celebrated numismatic auctions, selling cabinets of R. Coulton Davis and Lorin G. Parmelee in 1890, Francis Doughty in 1891, and George Woodside and James Oliver in 1892.

In 1902, Smith became ill and the partnership was dissolved on Nov. 26 of that year. Smith died shortly afterward, on March 2.

Proskey eventually held the partners final sale, in June 1903. This sale had been held up by a lawsuit brought by Smiths executor (his wife) over assets in the liquidated partnership, decided by the New York Supreme Court in April 1903.

Thereafter Proskey conducted several additional auctions on his own account through 1908.