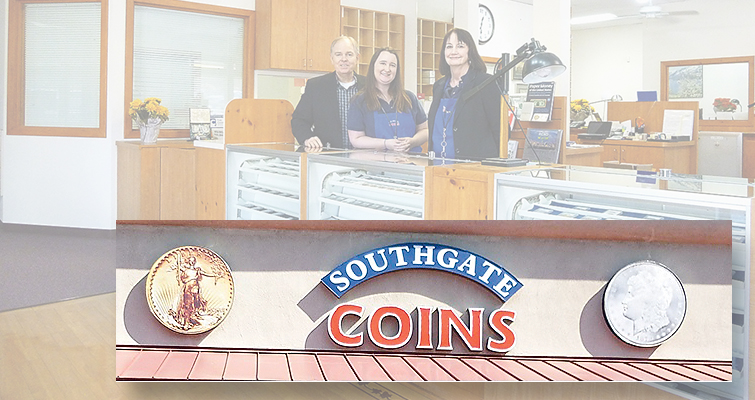 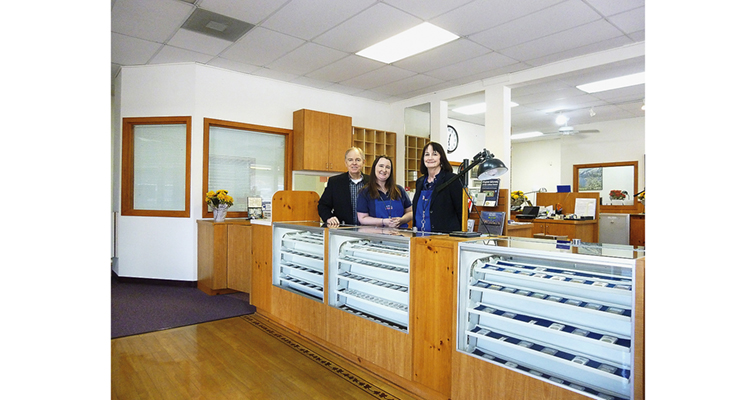 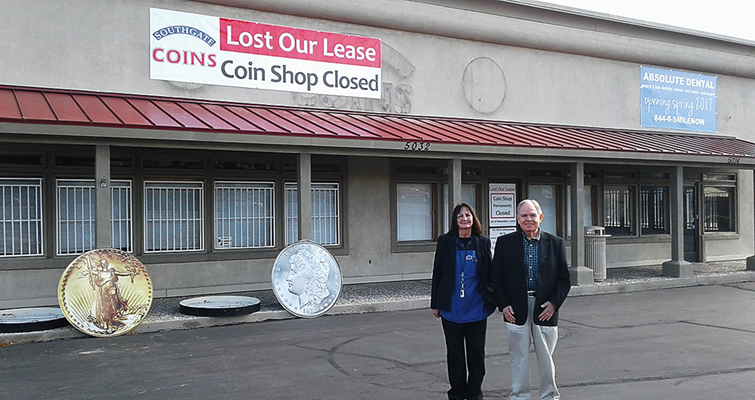 Marie and Rusty Goe bid farewell to the storefront they called their numismatic home in Reno, Nev.

Rusty and Marie Goe from Southgate Coins in Reno, Nev., issued the following saga of their being forced to close their storefront because the landlord chose not to renew their lease, which expired at the end of November.

When a landlord of a shopping center informs a tenant that his or her lease will be terminated, that tenant’s fate is decided: it’s time to go. This is the course Rusty and Marie Goe, owners and operators of Southgate Coins in Reno, Nev., since 2001, must take. The Goes lost their lease because their landlord, Basin Street Properties, found another tenant who would lease more space and pay a higher rent-rate than the Goes would lease or pay.

Rusty Goe said that he and his wife, Marie, had not planned to close their popular coin shop in such an abrupt fashion, but that they had no choice. “We had heard rumors for the past year and a half that a Dental Management Services Organization (DMSO) called Absolute Dental wanted our space and the space next door to us,” said Rusty Goe. “But it wasn’t until early August this year that our landlord, Basin Street, sent us an email notifying us that they would not renew our lease when it expired at the end of November.” The news disheartened the Goes.

Marie Goe said that if the perfect space located somewhere on South Virginia Street’s southern corridor had become available, they would have considered setting up a new store.

“But since we are already near retirement age,” said Marie, “it doesn’t make sense for us to go to all the trouble and expense to set up a new store.” She says it takes considerable effort and cost to build out a coin shop that would replicate their current store.

“Just to have the basic facilities we have now, with all the security systems (and safes) we need, so we could provide our customers with the services they have come to expect would require a substantial investment of time and money on our part,” Marie Goe said. “When we were younger we met such challenges with vigor; but now we aren’t as adventurous.”

The Goes moved their rare coin business from Las Vegas to Reno in 2001. Marie remembers that it took months to find the right location for their store in Reno and that the process of building out their store to meet their needs “was exhausting.”

Business soon increased beyond the Goes’ expectations, and within three years of establishing their Reno-based business they more than doubled the size of their store. The 2004–2005 remodel took five months, and was “very costly,” said Marie Goe. “But we were happy with the results.”

But that was more than 11 years ago, and, according to Marie, “We don’t have the energy to go through a similar experience today.” Additionally, she said, “We don’t have as many working years ahead of us as we did back then.”

The Goes would have preferred to work in their existing coin shop until 2021, which would have allowed them to celebrate their 20th anniversary of operating Southgate Coins. By then, they would have tried to find a buyer who could have taken over the turnkey business. But their landlord had other plans.

Rusty Goe said this is the second time that Marie and he have lost a lease.

“Back in 2000–2001, our landlord in Las Vegas sold the shopping center we were located in to the school district. All of us tenants were given short notice that we had to vacate our spaces,” he said. That event was the catalyst that brought the Goes to Reno.

The Goes are uncertain as to what extent they will continue their business after they have vacated their location at 5032 S. Virginia St. “It’s tough enough for small businesses to string together many successful years,” said Rusty, “and when landlords force unexpected circumstances to happen it makes it much tougher.”

“We still have our website,” said Rusty, “and the hundreds of customers we have can follow us on it.” He says he will miss “the daily one-on-one personal interaction” with his in-store customers. “We have developed so many friendships with persons who frequently visit our Reno store,” said Rusty. “Our time in Reno has been good for us.”

Rusty said he will pursue his research projects and do more writing. He has already published two full-length books. The first was The Mint on Carson Street, which is an introduction to the history of the Carson City Mint and a guide to all of the coins produced at that plant.

This book won numerous awards (including one from the Numismatic Literary Guild and one from the Professional Numismatists Guild) in 2004. His second book, James Crawford: Master of the Mint at Carson City, which is a biography of the longest-serving superintendent at the Carson City Mint, also won awards when it was released in 2007. He is currently working on a third book, The Confident Carson City Coin Collector.

In 2005 he founded the Carson City Coin Collectors of America, a club dedicated to increasing knowledge about the Carson City Mint and the many coins produced there. This club published a journal called Curry’s Chronicle from 2005 through 2015, for which Goe served as editor.

Over the course of its 10 years of publication, it won many awards. Goe’s articles have appeared in many national publications, as well as journals and local newspapers. He has presented many lectures both locally and across the country.

Marie has many activities to occupy her time since the doors have closed for good at their store. She is a passionate animal rights supporter, and she will continue to interact with the community of animal rights activists. She is looking forward to finally having an opportunity to work in her yard. Visits to the library will become a regular routine for her.

Additionally, her friends will enjoy good fellowship with her. And she won’t be completely out of the business world, because she will continue to help Rusty maintain and operate their Southgate Coins website.

Although the closing of their storefront business didn’t come at an opportune time for them, the Goes are accepting it as a “necessary ending.” They say that while outwardly it might seem an unfair consequence, it must still be “all a part of a providential plan.” 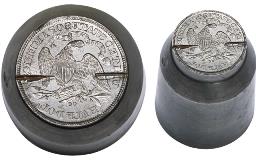 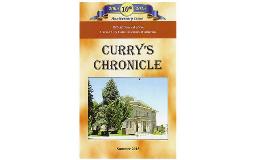 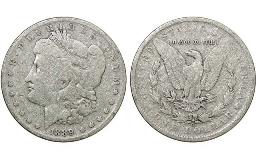