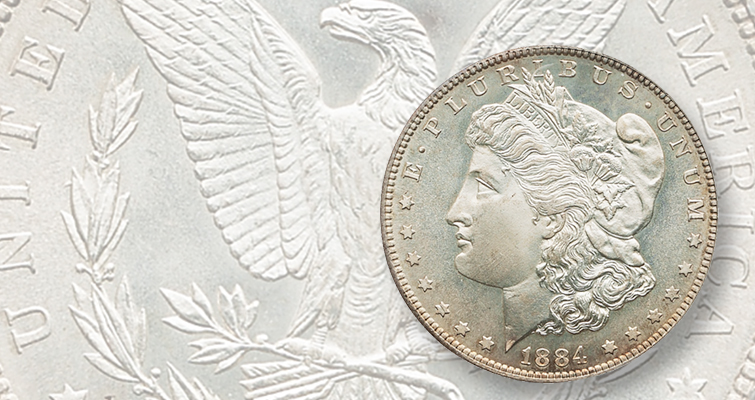 At Sotheby’s May 21 Historic Coins and Medals auction, among the coins expected to bring top prices is the Stone Collection’s 1884-S Morgan dollar, graded MS-67 by PCGS with a green CAC sticker and an estimate of $300,000 to $500,000. 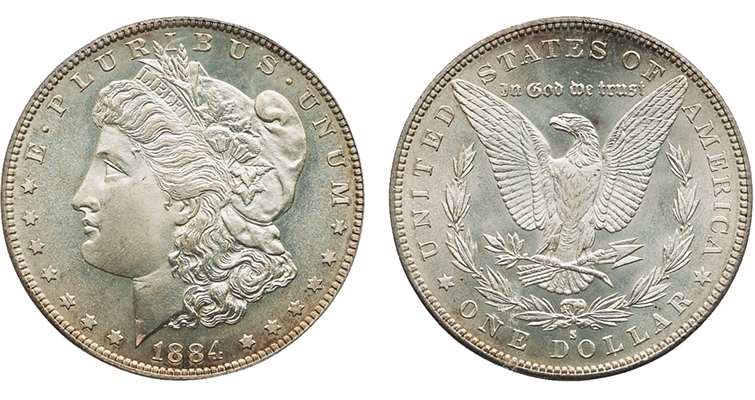 The 1884-S Morgan dollar, graded MS-67 by PCGS, is just one of many high-grade rarities in the collection, which is complete by date and Mint mark.

New York auctioneer Sotheby’s will present a collection of Morgan dollars from the collection of Ralph and Lois Stone on May 21 that it calls “one of the finest ever formed.” The collection is expected to sell for more than $3 million and is complete by date and Mint mark.

As Sotheby’s wrote in its press release, “Quietly assembled by Ralph Stone, a discerning northern California banker and collector, the collection has remained unseen and all but unknown to the collecting fraternity since Stone’s death more than twenty years ago.”

Regarding Stone, Sotheby’s records, “A graduate of the University of California at Berkeley, he majored in Economics, and played football at the highest level, including in the (in)famous 1929 Rose Bowl when California lost because of ‘Wrong Way’ Reigels returning a fumble towards his own end zone.” Stone would spend his career as a banker and was nominated by President Gerald Ford to be chairman of the Federal Home Loan Bank Board in 1976.

The collector was described by Sen. William Proxmire as a “forthright, intelligent, and charming person.”

Richard Austin, head of Sotheby’s Books and Manuscripts Department, commented: “Sotheby’s has traditionally had great success with extraordinary coin sales and we are excited to offer the Stone Collection on behalf of these long-standing clients. The sale has everything the market desires: rarity, condition, provenance and rediscovery.” He added that the collection was formed during the first decade of third-party grading, and the coins will be sold in their original holders; many have additionally received a sticker from Certified Acceptance Corp. recognizing the coin’s quality.

Despite his wealth and sharp collecting eye, the collector remained low-key about his numismatic activities. Sotheby’s remarks, “As a collector of coins Mr. Stone was a remarkably private man, and although a number of prominent dealers recall his name and remember the treasures he purchased that had passed through their hands, none recall having met him.”

Two San Francisco Mint dollars received the highest estimates of $300,000 to $500,000 each. One of these is an 1884-S Morgan dollar graded Mint State 67 by Professional Coin Grading Service with a green CAC sticker. The coin is possibly the finest example ever to appear at auction.

Sotheby’s describes it as “nearly perfect,” adding, “Fully lustrous, with splendid cartwheel effect. A vibrant coin, overlaid with a lovely light, creamy gold hue, which deepens subtly toward the area near the date.”

PCGS has graded just three in top grades: an MS-65, an MS-67 (the subject coin) and an MS-68 that is considered the finest known.

PCGS has graded fewer than a dozen in MS-64 and these are routinely six-figure coins, including one in a June 2015 Legend auction of the Coronet Collection where the PCGS MS-64 example, bearing a green CAC sticker, realized $114,562.50. Legend wrote, “The Coronet Collector had his eyes on the MS-68, but the owners didn’t want to sell, so you better believe this coin is nice.”

Although 3,200,000 Morgan dollars were minted at the San Francisco Mint in 1884, nearly all released examples saw moderate to heavy circulation. Many Mint State Morgan dollars survive because they were kept in Mint vaults for decades, but this issue may have been part of a shipment of nearly 100 million surplus dollars sent from the San Francisco Mint to be converted by the British to Indian rupees. Mint records are incomplete, and it’s a bit of a mystery why this issue is so scarce in Mint State grades, and even choice About Uncirculated examples are uncommon. 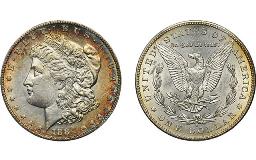 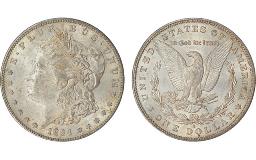