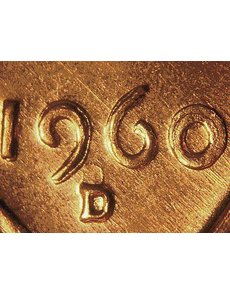 By coincidence, I recently received two questions about 1960 Lincoln cents from different individuals.

When Lincoln cents were first released in 1960, they had a Small Date logotype. Dies were made starting in late 1959, and included digits that were identical in size to the 1959 issue. While this presented no problems during the prior year, the small 0 in the date 1960 filled during striking. The easy fix was to enlarge the date. Early in 1960, the U.S. Mint began releasing so-called 1960 Large Date cents.

Collectors promptly recognized the switch and also that examples with Small Dates were scarcer than their Large Date counterparts.

Here’s where it gets interesting.

When the dies were made, they received impressions of the coin’s design from a hub. It took multiple impressions to fully impart the design. Between each impression, dies were heated to relax the steel, which aids the process.

Apparently for a period of time in 1960, both Small Date and Large Date hubs were being used simultaneously. At least four times, a Small Date hub was used to impress a die that had received a prior impression from a Large Date hub.

The second question is trickier. By definition, a Small Date Over Large Date cent must at least be a doubled die because it received two misaligned impressions from the hubs during fabrication of the die, but I answered no to that question as well. It turns out that one of the Proof 1960 Lincoln, Small Date Over Large Date cents is a tripled die! Three distinct impressions are visible, especially on the words LIBERTY and TRUST. What sneaky, sneaky questions!

These Small Date Over Large Date varieties are all very popular. Examples of both the Proof and the Mint State coins trade for a few hundred dollars to well over a thousand for high-grade examples.