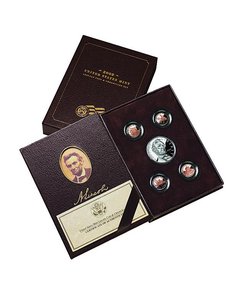 The 2009 Lincoln Coin and Chronicles set, containing Proof examples of the commemorative Lincoln Bicentennial silver dollar and Lincoln cents, continues to sell at a premium. Not all U.S. Mint sets rise in value.

What factors allow a U.S. Mint packaged set to retain, or even exceed, its value over time?

The degree of rarity of a particular coin or coins within a set is usually the foremost factor for sets that grow in value, but there are other elements.

At the other end are sets that possess little to no rarity, including many annual Proof sets issued from 1968 to the early 1990s, and that today sell for less than their original issue price.

Some sets possess a premium above their issue price despite not holding individually rare coins.

None of the coins within the set are scarce. The Proof silver dollar could be purchased separately, and the four 95 percent copper Proof cents were also available in the Mint’s annual Proof sets of that year.

The Lincoln set had an issue price of $55.95, and a strict one-set-per-household limit was enforced for the 50,000 sets. A fast sellout followed and almost immediately sellers were flipping the sets on eBay for $300 or more.

Today, the sets still sell for a premium above their issue price, though not as lofty as in the first few weeks after their issuance. Almost three years later, one can expect to pay $125 to $150 for a set in its original packaging.

The moral of the story? Some sets retain value for the rarity contained within, while others retain value merely because collectors like them. And collectors apparently liked, and continue to like, “Abe.”

The rarity of the individual coins in the set, the presence of ordering limits at the time of issue, and the popularity of the coins all impact whether a set will be a long-term winner. ¦