Some coins get rerouted: not all coins belong in circulation 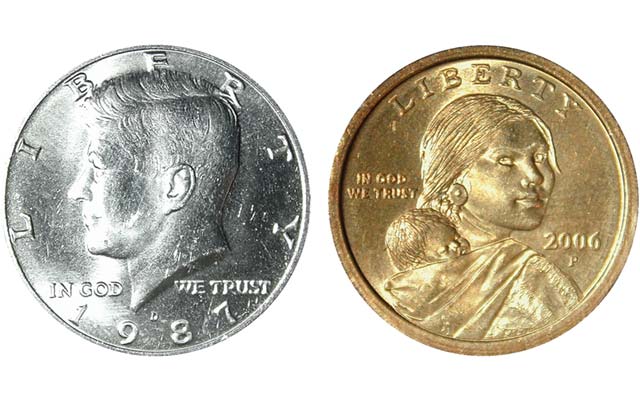 The 1987-D Kennedy half dollar found in a roll was struck only for that year’s Uncirculated Mint set. The 2006-P Sacagawea dollar was also found in a roll.

As I searched through 20 rolls of Kennedy half dollars and then two rolls of small-sized dollar coins, I found myself singing a very particular song that I learned many years ago while watching a children’s television show.

The words of the musical composition that are most appropriate to this month’s roll finds are found at the song’s beginning. The song starts with the following two phrases. OK, let me clear my throat before I launch into it. Now, here goes!

Maybe you remember it. Anyway, I will, however, for the sake of this column, make a slight change to the lyrics. The song should go like this: “Two of these coins are not like the others — Two of these coins just do not belong!”

According to my 2014 A Guide Book of United States Coins by R.S. Yeoman, Kenneth Bressett, senior editor, both of my featured finds were not issued for circulation. The first, a 1987-D Kennedy half dollar was only supposed to be “included with Mint and Souvenir sets.”

Of the 2,890,758 pieces reported as being minted, none should be found in a roll mixed with other normally circulating halves, yet this truly outstanding-looking coin made an appearance as I opened up and emptied a roll of half dollars onto my desk. The surfaces of this coin are prooflike, making it a beautiful example of this issue to add to my Found in Rolls collection.

My next unusual find caused me to do a double take as I checked the date. While searching through Sacagawea dollars, it is safe to say that over time I have seen tens of thousands of the 2000-P coins. In fact, I almost missed this coin as my first reaction while viewing it was to think it was just another 2000 piece.

I was somewhat surprised as I examined the date’s final digit more closely to see that what my brain initially registered as a 0 was really a 6, making this coin a 2006-P Sacagawea dollar. The P Mint mark, of course indicates that this coin had its origin at the Philadelphia Mint. With a reported mintage of 4.9 million pieces, this coin is toned and definitely shows some signs of circulation. I can now add this piece to my “just does not belong” collection along with many others.

You may also discover coins that should not be found in regular circulation.