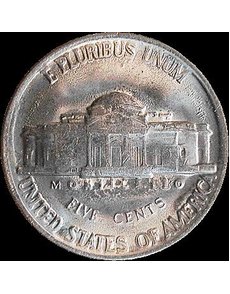 A very severe, but entirely conventional case of die deterioration is seen on the reverse face of this 1983-P Jefferson 5-cent coin. 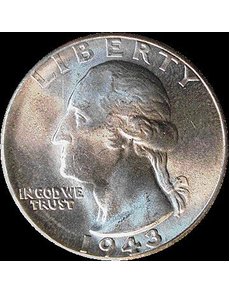 The left side of the obverse die that struck this 1943-S Washington quarter dollar was abnormally soft. A bulge has developed beneath Washington’s throat, and the motto IN GOD WE TRUST appears as if written in italics. 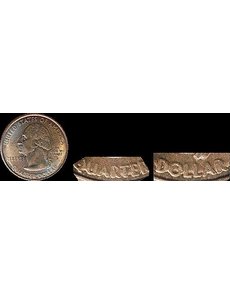 The periphery of the obverse die that struck this 2000-P New Hampshire dollar experienced exaggerated and premature deformation. This led to grossly deformed letters and the formation of low, broad ridge that runs through many of the letters.

Die deterioration (also known as “die wear” and “die fatigue”) is the normal consequence of pounding away at hundreds of thousands of planchets.

A die that is near the end of its useful life exhibits a “late die state” characterized by such features as puffy letters, radial flow lines and an orange-peel texture. If it is not replaced in a timely fashion, the die will produce unacceptably degraded designs.

Shown here is a 1983-P Jefferson 5-cent coin struck by dies that should have been retired long before. Severe die deterioration is not a die error per se, since it will eventually affect any die that’s left in service long enough.

However, some forms of die deterioration and deformation are legitimate errors because the pattern, rate and scale of deterioration are quite abnormal. Previous columns have dealt with die subsidence (sunken die) errors, in which the die face caves in as the result of plastic deformation. This column is devoted to a related anomaly, the soft die error.

A soft die error can be defined as a pattern of deterioration or deformation that is exaggerated, premature, peculiar and often localized. Instead of the die sinking in, the metal moves around more or less within the plane defined by the original die face. Admittedly, many die errors combine the characteristics of both die subsidence and soft die errors.

Possibly the best known, and certainly the most venerable soft die error coin, is the “goiter neck” 1943-S Washington quarter dollar, an example of which is shown here. A bulge beneath Washington’s throat (the “goiter”) represents a spot where the die face sank in slightly.

Elsewhere on that coin the deformation is more broadly distributed, although it doesn’t extend to the right side of the obverse face. The letters of IN GOD WE TRUST appear in italics and a low ridge runs through the LIB of LIBERTY. The design rim has disappeared from 6:00 to 10:00. The reverse face is normal.

As to why the left side of the obverse die deformed in this fashion is a matter of speculation. The wrong type of steel may have been used in the rod from which the working die was cut. Or perhaps the steel was improperly forged, leaving it with impurities or the wrong ratio of carbon to iron.

Since only one die was affected, I suspect that improper die preparation is responsible. Improper annealing, tempering or quenching can certainly alter the hardness of die steel.

All quarter dollars struck by this die show the same degree of deformation. This suggests that the deformation occurred shortly after installation and then stabilized.

A much more recent soft die error is seen in a 2000-P New Hampshire quarter dollar. The peripheral letters on the obverse face are grossly deformed, although the distortion is slight between 11:00 and 1:00. A low, broad, irregular ridge runs through the peripheral letters, extending clockwise from 2:00 to 8:00. The reverse face is affected with a similar pattern of deformation, although it is far less severe.

This pattern of deformation is not typical of even Very Late Die State quarter dollars, although the ridge itself does bear a passing resemblance to the “ridge rings” that often develop on copper-plated zinc cents. The central portion of the obverse face shows only subtle signs of microscopic die wear. The localized nature of the distortion is apparent.

I have seen a similar pattern of deformation on the obverse face of some New York quarter dollars, but nothing else similar in the State quarter series.

Accelerated die deterioration also can develop when you crank up the striking pressure to handle excessively hard planchets. This is the likely explanation for 1954-S Jefferson 5-cent coins that frequently developed a bulbous mushroom shape on the reverse face.