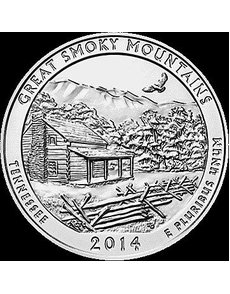 Despite the heavy snowstorm that passed through the region the night before, approximately 300 people attended the event in Mills Auditorium at the Gatlinburg Convention Center hosted by David Croft, acting associate director of manufacturing at the U.S. Mint, and Pedro Ramos, acting superintendent of Great Smoky Mountains National Park.

“We are honored that our park is being commemorated in such a special way by the United States Mint,” Ramos said. “The collection of cabins protected within Great Smoky Mountains National Park is a resource worthy of national attention as is the legacy of the memories and feelings they evoke.”

Following the Jan. 29 ceremony, those in attendance — some from as far away as California — were able to exchange cash for $10 face value, 40-coin rolls of the new quarter dollars.

Citizens National Bank conducted the coin exchange, during which $20,000 in face value of new quarter dollars were exchanged.

Costello’s coin design depicts a historic log cabin found within Great Smoky Mountains National Park. It features a segment of the lush forest and a hawk circling above.

The current options are:

? Three-roll set — one roll each from the Denver, Philadelphia or San Francisco Mints, $46.95.

In addition to the circulation-quality coin options, the United States Mint is expected to offer various other collector products featuring the 2014 America the Beautiful quarter dollars, including sets in Proof, both in 90 percent silver and in copper-nickel clad versions; and based on past years’ offerings, various other sets probably focusing on the coins of a single state in various finishes and from various Mint production facilities.

The U.S. Mint is accepting orders for the quarter dollar products at its online catalog, www.usmint.gov/catalog, and by telephone at 800-872-6468. Hearing- and speech-impaired customers with TTY equipment may order by calling 888-321-6468.

Shipping and handling will be charged. ¦