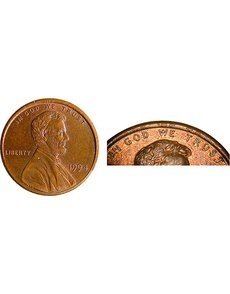 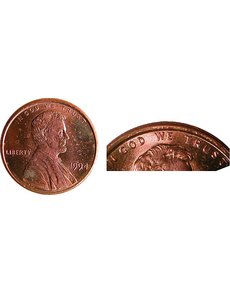 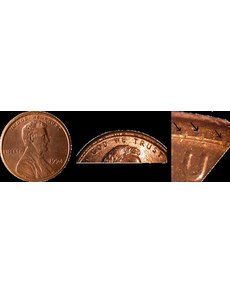 Beware any coin in which one face is smooth and flat as a pane of glass. It almost always points to post-strike damage of an intentional or accidental nature.

The illustrated 1969-D Lincoln cent at first appears to be double-struck, with a flipover brockage on the obverse face of the second strike. The incuse, mirror-image letters D WE TRUS from the motto overlap the raised letters of LIBERTY from the first strike. Any hope that this is a genuine error is immediately deflated once you turn the coin over. Opposite the “brockage,” the reverse face is flat and smooth and lies at the same level as the adjacent unaffected design.

This coin was not struck against another planchet because a genuine uniface strike would display a convex surface. It’s clear that the reverse face of this coin rested against a flat, unyielding surface while a cent was crushed into the obverse face.

Our next example is a cent planchet that shows on one face a jagged internal margin that encloses a sunken area with a complex texture. One might be tempted to interpret this as a strike by a badly broken, badly damaged die like that seen in the Sept. 19, 2011, column. But once again, the opposite face shows a smooth, flat surface that lies at the same level as the unstruck portion of the planchet. In this case the damage might have occurred inside the Mint. I have seen a number of similarly damaged planchets with an array of weird textures opposite the flat surface.

The lone exception to the rule

Error dealer Fred Weinberg recently introduced me to an off-center Jefferson 5-cent coin with a smooth, flat surface on the obverse face. It’s clearly a genuine striking error because it was struck only once and the reverse face is die-struck.

As best as I can tell, the featureless obverse face was struck through a flat machine part or piece of hardware that was thick enough to prevent any of the obverse design from bleeding through. While suspicion might naturally turn toward the feeder mechanism, impacts from this source always seem to leave a coarse or matte texture behind.

The flat surface slopes down dramatically from the thick center of the planchet to a thin, sharp edge. Some metal has been torn from the planchet’s edge, leaving the coin slightly underweight at 4.83 grams. It would seem that the impact of the obverse (hammer) die was delivered at an angle, producing a tilted die error (vertical misalignment).

The surface is actually not completely flat; the slope is steeper and slightly concave in the upper left corner (opposite UNUM). I suspect that a second, smaller object was trapped here between the flat plate and the obverse die (see the June 10 column for an analogous situation).

On the reverse face the die-struck design ends rather abruptly in the middle of the planchet. The upwardly-tilted portion of the die was not able to generate any pressure past this point. I suspect the flat plate continued on past this point, but it failed to leave an impression for the same reason.

A truly remarkable aspect of this coin is that the word UNUM is noticeably displaced relative to the representation of Monticello. This can only mean that these two parts of the design were generated micro-seconds apart during the descent of the hammer die and that they were pushed apart during this time interval. The gap between inscription and building has been stretched-out and scraped clean beneath a pressure point generated by the object trapped between plate and die. This scraping/stretching action also destroyed the right side of the building. I’m not entirely sure which portion of the design was generated first (building or motto), but as soon as it formed, striking pressure was lifted completely and this portion of the design was pushed sideways by the expanding metal beneath the pressure point.

It would seem that the hammer die or die assembly was profoundly unstable, a situation exacerbated by the smaller object directly beneath it. This smaller object may have instigated a rocking movement in the die face. It not only generated the pressure point, but contributed to uneven, fluctuating striking pressure either side of it.