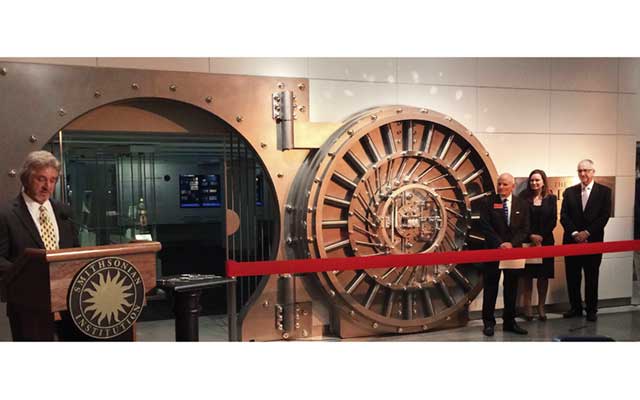 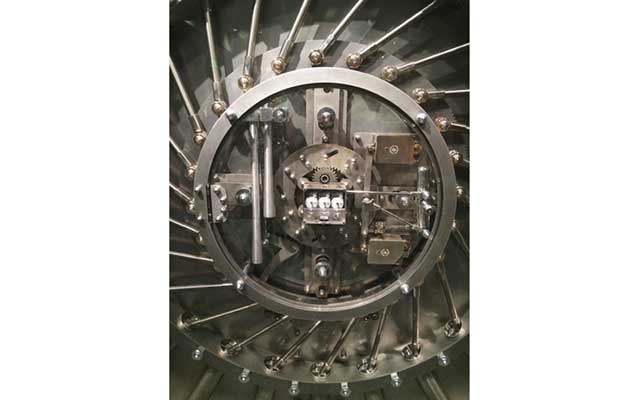 Detail of the decorative and nonfunctioning vault door shows the work that went into crafting this impressive device that invites entry to the display.

The Smithsonian’s National Museum of American History officially opened its new exhibit of the National Numismatic Collection titled “The Value of Money” on July 15. The opening was timed to coincide with Whitman’s Baltimore Expo, and the evening opening event included many of the biggest names in numismatics, many of whom were donors to the display.

The display, which had a soft opening on July 1 and was then closed to make adjustments, provides a broad view of numismatics, with objects spanning more than 2,600 years. It works to the collection’s unique strengths across geography and time.

The exhibit examines the origins of money, the political and cultural messages that money conveys, new monetary technologies, and how people collect money today. At 1,000 square feet, the new display triples the floor space devoted to numismatics in the current exhibition titled “Stories on Money.” That exhibit remains open, although several of the coins that were in that display are absent, as they are now included in the new display.

Among those speaking before the ribbon cutting at the opening were John Gray, director of the National Museum of American History; David Skorton, who was recently named the 13th secretary of the Smithsonian Institution; Rosie Rios, the treasurer of the United States; and Jeff Garrett, the incoming American Numismatic Association president, who was instrumental in raising funds for the new exhibit. Garrett also serves on the board of the National Museum of American History.

In his remarks, Skorton said that the American History museum was different, stating, “It’s not a regular museum. ... it’s a cool one.”

Rios addressed the redesign of the $10 note to include a portrait of a woman in her comments, characterizing the process of placing a woman on the note as a “true honor.”

She said that the design will be unveiled in 2020, which is also the centennial of the 19th Amendment to the Constitution, which provided women with the right to vote, and that the new design would mark the first woman on U.S. paper money since Martha Washington appeared in 1896.

The first thing that visitors see when encountering the display is the life-sized vault door produced for the display by Vault Structures Inc. in Fort Meyers, Fla., which typically manufactures vault doors for banks and other institutions. The vault door is not operational, and while it won’t help keep the objects on display safe, the door is intended to simulate the experience of entering the National Numismatic Collection’s storage vault. Ellen R. Feingold, curator of the National Numismatic Collection, said, “When visitors look through the gallery’s vault door, we hope that they will feel as though they are looking into the collection’s vault — a space that secures one of the Smithsonian’s most valued collections.”

The Smithsonian said in comments describing the exhibit, “Upon entering, visitors will feel as if they have stepped into a jewel box of captivating treasures and surprising stories, particularly as they approach a central display case featuring stunning collections.” The central display case includes the collection’s greatest rarities, but also visually interesting items such as an impressive and opulent gold necklace made with Coronet type gold coins and a $100,000 note issued for use in the U.S. Federal Reserve system in 1934.

There's more to this story. Check back with CoinWorld.com later for a look at the objects on display in the exhibit.