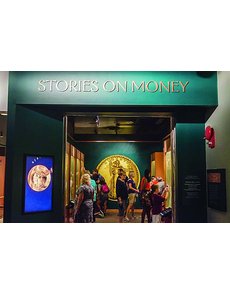 The current numismatic exhibit, Stories on Money, in the East Wing of the Smithsonian Institution’s Museum of American History, is restricted to a 500-square-foot gallery. 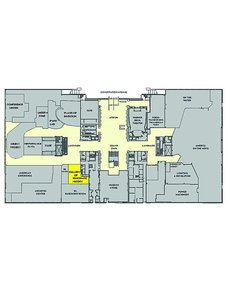 Once completed, the dedicated numismatic gallery, in bright yellow, covering more than 1,000 square feet, will be positioned in the museum’s West Wing. The new gallery will allow for fixed displays and rotating displays of numismatic items from more than 1 million objects in the National Numismatic Collection.

Officials at the Smithsonian Institution’s National Museum of American History hope to raise within the next sixth months the final $300,000 toward the $1.5 million goal to establish a permanent numismatic gallery.

The exhibition gallery will be twice the size of the current gallery.

The museum is home to the National Numismatic Collection, which holds more than 1 million coins, medals and other numismatic artifacts from around the world.

Only a small fraction of the collection is currently on public display as part of the temporary “Stories on Money” exhibit in a 500-square-foot nook in the museum’s East Wing. The current exhibit will remain on display until at least the spring of 2015 when the permanent numismatic gallery is reopened as part of the museum’s extensive renovations. The new exhibit will be situated in a more than 1,000-square foot area on the first floor of the museum’s West Wing.

Plans for a “Gallery of Numismatic History” are part of an overall scheduled $120 million renovation of the west exhibition wing that will create new galleries.

Renovations are currently under way, with some exhibit areas already closed, a process that began last October.

In addition to the Gallery of Numismatic History, the first floor of the West Wing, when renovated, will also house American Enterprise, an 8,000-square foot exhibition on the nation’s economic history, and a new Center for History Discovery. New exhibitions on the American presidency and first ladies, as well as entertainment, sports and popular culture, will occupy the second and third floors. Construction will begin in 2012, and the wing is scheduled to reopen in the spring of 2015.

The transformation of the museum is possible through a public-private partnership. The federal government has committed $63 million to revitalize the infrastructure of the building.

The remaining $57 million for space preparation and programming will be raised through private philanthropy.

Items from the National Numismatic Collection for decades were on public display on the museum’s third floor within a 3,000 square foot gallery. The artifacts were returned to vault storage in 2005 when the space housing the numismatics department was lost in renovations to the center of the museum.

Completed in 2008, the phase of the multi-year, multi-stage renovations that claimed the numismatic exhibition area included opening up the center of the museum to the third floor and construction of a new gallery for the Star-Spangled Banner, the flag that inspired the National Anthem.

David Allison, head of curatorial affairs at the Museum of American History, told Coin World July 16 that the gallery space dedicated to numismatic exhibition and its location on the first floor would not have been possible without the fund-raising efforts of Jeff Garrett, president of Mid American Rare Coin Gallery in Lexington, Ky.

Garrett, a numismatic researcher who has used the National Numismatic Collection and the museum’s resources in his research toward co-authoring several books, over the past year has secured pledges from the numismatic community of $1.2 million, 80 percent of the overall commitment needed.

To date, according to museum officials, the donor list includes the following, but is not complete, as some donors wish to remain anonymous:

Museum officials are not making a direct public appeal, but anyone interested in making a tax-deductible donation may contact the museum directly.

Allison said no plans have been developed as to what numismatic items from the National Numismatic Collection will be placed in the dedicated numismatic gallery. The space will allow for exhibit of some items on a lasting basis, while also moving items in and out of the exhibit area on a rotating basis.

Rotating items would include a high proportion of paper artifacts and others that are subject to degradation from exposure to light, Allison said.

Allison said renovations will include installation of fiber-optic lighting that will limit the light exposure for such items.

In the years following the closing of the third floor numismatic gallery, a numismatic exhibit in addition to the Stories on Money temporary gallery was also on public display in the Smithsonian Castle.

Privately contributed funds are supporting traveling exhibits, some of which have appeared at American Numismatic Association conventions.

During 2011, one of the National Numismatic Collection’s two 1933 Saint-Gaudens gold $20 double eagles was seen by thousands of people during a nine-city European exhibition underwritten by The Samlerhuset Group.

The Samlerhuset Group is a Norwegian-owned, international mail-order company that sells traditional collectibles such as coins, medals, stamps and paper money.

The Samlerhuset Group is also a part owner of the Berlin World Money Fair in Berlin and of the Norwegian Mint. ¦