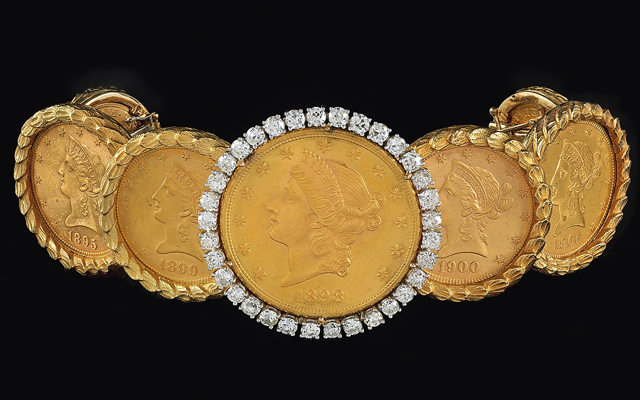 Among the numismatic items to be placed on exhibit is this bracelet fashioned from different denominations of United States gold coins. 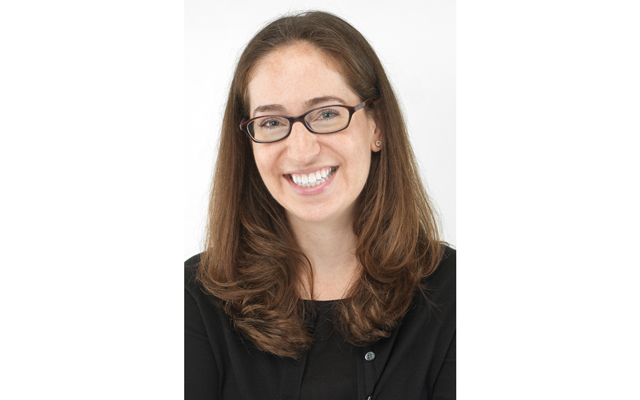 Ellen Feingold, the new curator of the National Numismatic Collection in the Smithsonian Institution, is working toward bringing more of the collection into the public’s eye. 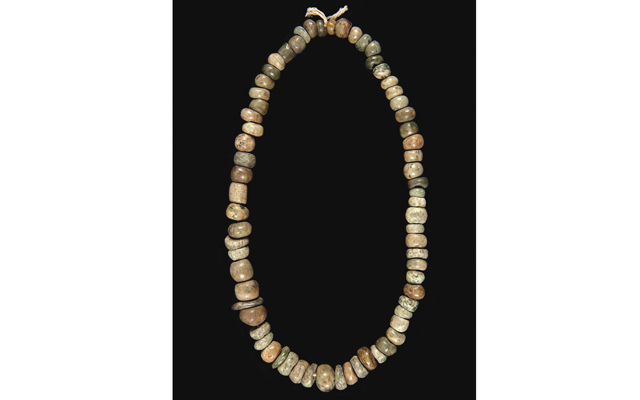 Beaded necklace used as money is fabricated from stone beads in Oaxaca, Mexico. 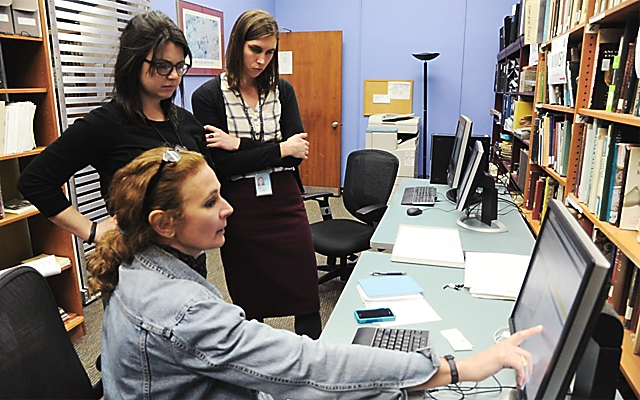 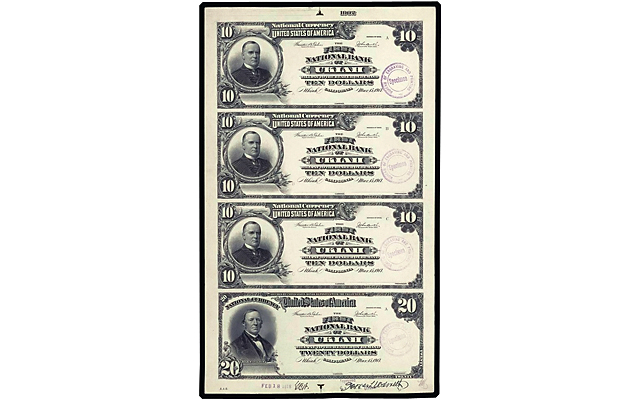 The digitization includes thousands of national bank note proofs, with all details associated with hits creation included. Shown is a Series 1902 proof sheet from the First National Bank in Ukiah, Calif.

Ellen Feingold has only been curator of the National Numismatic Collection in the Smithsonian Institution’s National Museum of American History since June 30, but already she’s working toward bringing more of the collection into the public’s eye.

Among the targets at the top of her list is returning more of the Josiah K. Lilly gold coin collection to public display after its complete removal in 2004 to accommodate extensive renovations that eliminated the space where the collection was on exhibit. Feingold said she would also like to expand on her numismatic efforts initiated at the British Museum, creating similar exhibits at the Smithsonian and possible joint exhibitions.

Feingold is an experienced historian, curator, numismatist, and educator who served in 2013 as a volunteer with the National Numismatic Collection.

Feingold’s most recent assignment was as project coordinator for the Money in Africa Project in the Department of Coins and Medals at the British Museum. In this role, Feingold she conducted innovative research on the history of currency counterfeiting in the British Empire and co-curated a display on mobile money in Africa for the Citi Money Gallery.

Jones said she also supports NNC items being loaned out within the Smithsonian family of museums for public display. Jones said NNC curators will meet with colleagues in other Smithsonian museums to consider inclusion of items for temporary exhibits or permanent gallery exhibition,

Jones said more funding is being allocated toward the Smithsonian Institution’s numismatic endeavors than in previous years.

In a telephone interview July 2, Feingold and Jones explained the museum’s efforts to digitize items within the NNC for online research, opening up the collection for extensive historic research by collectors and academics, and publication of historical research for educational purposes. Feingold said among her efforts will be examining currency counterfeiting in America under British rule.

Of the more than 1.6 million objects alone within the National Numismatic Collection, much of that material has never been seen on display for the public, Feingold said. She said she hopes to rotate more of the material through the numismatic gallery to excite visitors.

The museum’s plans for the National Numismatic Collection include a new exhibition scheduled to open in July 2015 on the first floor of the West Wing, as part of its transformation of exhibition and program space. The exhibition, called “The Value of Money,” will display the many forms money has taken throughout history and explore how money reflects the social values of communities around the world.

It will look at money as a medium of exchange and as a means of communication for governments, citizens, and artists.

The display area in the West Wing nearly triples the amount of space most recently designated for National Numismatic Collection exhibits before their closure for building renovations.

Feingold said an extensive, illustrative catalog will be published in conjunction with the opening of the exhibit.

Starting in February, the Smithsonian Digital Volunteers Transcription Center  began the work of digitizing the Bureau of Engraving and Printing’s archives of paper money Proofs. The initiative, in the case of national bank notes, includes series, state, and signature information. The effort will encompass all materials associated with paper money and fiscal documents from the BEP archives from 1865 through 1930.

A similar digitization initiative is anticipated to be undertaken for coins and other numismatic items.

In 1968, Congress approved legislation permitting the accession of the Lilly gold coin collection to the Smithsonian in exchange for a $5.5 million tax write-of for the Lilly estate.

The Lilly Collection contains 6,125 gold coins. It is considered one of the finest gold coin collections in the world. It arrived at the Smithsonian on June 13, 1968.

In August 2004, the Lilly Collection was mothballed when the museum was closed for renovations that eliminated the 3,000-square-foot numismatic gallery.

The renovations that eliminated the larger numismatic gallery made room in part for showcasing the Star Spangled Banner, the flag that flew over Fort McHenry during the siege of Baltimore during the War of 1812.

On June 12, 2009, a new numismatic gallery, measuring just 500 square feet, opened in the museum’s first floor East Wing. Construction is currently under way in the closed West Wing for a nearly 1,500 square-foot numismatic gallery that is expected to open in the spring of 2015.

Many individual numismatic donations have been made to the NNC, which include several from the Stack family, beginning in the 1950s. These donations include the personal papers from 1880 to 1917 of U.S. Mint Chief Engraver Charles E. Barber; a unique, reeded edge J.S. Ormsby $ Co. $5 pioneer gold coin; a 1792 Birch cent, which will allow the museum to complete a denominational set of the first coinage of the U.S. Mint; an 1879 Coiled Hair Stella $4 pattern in gilt aluminum; and a Proof 1879 quintuple Stella pattern in gold and a second Proof example in copper-gilt.

The National Numismatic Collection is the only collection to hold examples of all three classes of 1804 Draped Bust dollar, the Class II piece being unique.

The NNC has also held since the 1950s the Grand Duke Georgii Mikhailovich Collection, the finest collection of Russian numismatic items outside The Hermitage, with many items not found in any other museum.

A research associate in 2013 whose efforts to translate from Russian into English the Mikhailovich collection records was underwritten by a collector in Russia.