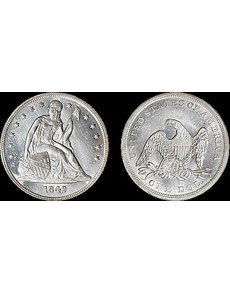 If the Mint State 64 1842 Seated Liberty dollar illustrated above were not certified and encapsulated in the plastic holder or “slab” of a major third-party grading service, would you still buy it?

In the Dec. 31 issue, I defined, more or less tongue-in-cheek, a slab as being “a hermetically sealed plastic holder enclosing a coin and preventing its owner from studying it closely.” That column, incidentally, brought in several comments suggesting that I write more of this humorous (?) stuff.

Another letter was from W.K., who suggested that the definition was a “witty, yet sage observation suggesting that the Slab Emperor is a little too scantily clad for the good of serious coin collecting. It strikes me, therefore, as amusing that a prominent numismatic firm bearing his name has advised me to put my beloved coins in these little plastic coffins to promote their ‘marketability.’

“But I’m not marketing my coins; I’m collecting them, studying them, weighing them, examining them closely under high-power magnification, and, yes, loving them. I have decided to leave the slabbing travesty to my executor.”

W.K.’s comments are, of course, well taken. Across numismatics, slabs are detested by some, particularly those who collect tokens, medals, early copper large cents and the like, with a heavy element of numismatics as part of their enjoyment equation, less emphasis on market value.

As a longtime collector of tokens and medals, 95 percent or more of my pieces are the way I purchased them — usually in paper envelopes with writing on the front, sometimes in auction “flips,” rarely certified. In that way, if I want to weigh a piece, examine the edge closely, take a high-resolution scan image or something else, I can do it easily enough. Although my collection is nearly all “raw,” when time comes to sell I will certainly think about having some of them slabbed.

Whenever the most dedicated old-time collector consigns his or her coins to be sold at auction, there is the request that they be certified. The reason for this is marketability. A coin marked Very Fine 20, Mint State 63 or whatever can be studied instantly by buyers, including investors who have relatively no grading knowledge at all, by collectors who are newcomers, or anyone else. Absent certification, most buyers sense there is a problem! My feeling is that certification does add value, and if it has a Collectors Acceptance Corp. sticker, even more value is added.

Coins thus described will attract a wide bidding audience, much more than if they were not certified. Anyone who does not like holders can easily enough take purchased coins and remove them. It would seem to be a win-win situation!