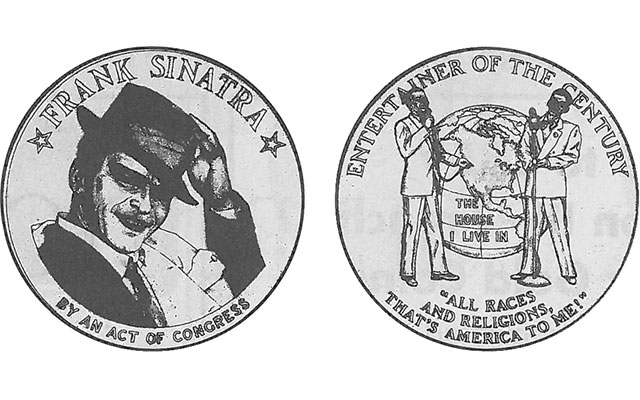 Images of design sketches for the proposed designs, before modifications, of the congressional gold medal authorized in 1997 for entertainer Frank Sinatra.

This is the seventh in a series of articles dedicated to congressional gold medals struck by the U.S. Mint:

It isn’t often that the U.S. Mint strikes a modern congressional gold medal without also producing bronze duplicates for sale to the public.

However, that was the case for the Frank Sinatra medal, authorized in 1997 and presented posthumously to Sinatra’s family in 1998.

The medal’s obverse, designed and sculptured by then U.S. Mint Sculptor-Engraver John Mercanti, depicts Sinatra in his 40s in a familiar pose, wearing a porkpie hat and with his coat slung over his shoulder.

The reverse, by then U.S. Mint Sculptor-Engraver Thomas D. Rogers Sr., shows two full-length renditions of the entertainer, one in his 20s, the other in his 60s, along with several lines of lyrics from his trademark songs.

The U.S. Mint released images of only sketches of the proposed designs before modifications. Reportedly, no images were taken of the actual gold medal before its presentation to the Sinatra family.

The Mint delivered the medal to President Clinton on June 4, 1998. The medal was presented to Sinatra’s daughter, Nancy, the following day at the Washington, D.C., offices of Rep. Joseph Serrano, D-N.Y.

Originally, reports suggested that production of bronze duplicates of the Sinatra medal was being blocked by the Sinatra family because of copyright issues with the designs. Later, the Mint disclosed that, while some legal and other undisclosed concerns had to be resolved, the Sinatra family was not blocking bronze medal production.

The Sinatra designs were modeled, dies were cut, and bronze trial had been made in preparation for full production, but that never materialized. Whether to produce the bronze duplicates was a government decision, according to Mint officials. Neither Mint nor Treasury Department officials ever disclosed why bronze duplicates of the Sinatra gold medal were never struck.

Currently available bronze duplicates of 3-inch gold medals are available in 1.5-inch and 3-inch sizes from the U.S. Mint’s website at http://catalog.usmint.gov/shop/medals/?_ga=1.186880939.2035841651.1400013284. Most of the bills authorizing the gold medals give the Mint authority to strike the collector versions of the medals.