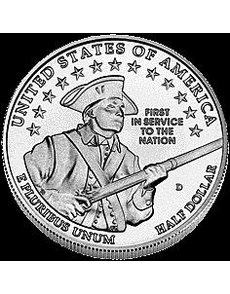 The reverse of the 2011 U.S. Army commemorative half dollar might be mistakenly labeled the obverse.

Recently my 9-year-old son asked me how to tell heads from tails on U.S. coinage.

His question sounded simple. But teaching my son how to tell heads from tails in circulating coinage wasn’t easy. I had to analyze devices on our coins from 1792 half dimes to 2011 Presidential dollars. Common devices include date, denomination, the inscriptions UNITED STATES OF AMERICA and LIBERTY, eagle emblem, olive branch, and mottoes IN GOD WE TRUST and E PLURIBUS UNUM.

U.S. circulating coins are fairly consistent in placing these components on the obverse or the reverse. Here are some findings:

? The date typically appears on the obverse, except in a few issues, such as the gold $1 and $3 coins when it appears on the reverse, and the Presidential and Native American dollars, on which the date is found on the edge.

? The inscription UNITED STATES OF AMERICA usually is on the reverse, except in a few coins, such as the Flying Eagle cent and the silver and copper-nickel 3-cent pieces, where it is found on the reverse.

? When the eagle emblem appears, it almost always is on the reverse (again, the Flying Eagle cent is an exception).

? When the olive branch appears, it usually is on the reverse, although there are exceptions, such as the Standing Liberty quarter dollar.

? When LIBERTY appears — and on a handful of issues, it doesn’t — the word is found on the obverse.

? When the motto IN GOD WE TRUST appears, it can be on obverse, reverse or edge, with more found on the obverse.

? When E PLURIBUS UNUM appears, it almost always is on the reverse (the Morgan dollar is an exception).

I explained all of these points to my son who then asked: “You say obverse and reverse. Why do we say heads and tails?”

I took out a handful of change and showed him. We use the terms “heads” and “tails” because often (but not always) a portrait of Lady Liberty, a patriot or historic figure appears on the obverse. Thus, the other side must be tails.

On older silver and gold U.S. commemoratives, however, you can find all manner of mottoes, heads and other devices gracing heads and tails in no particular pattern.

Take, for example, the two-headed 1904 Lewis and Clark Exposition gold dollar. Because we say “Lewis” before “Clark,” Meriwether Lewis is considered “heads” and William Clark, “tails.”

A few modern commemorative coins are a bit more confusing, as is the 2011 U.S. Army half dollar, where the bust of a patriot appears on the reverse. Miniature military scenes grace the obverse. Because we usually think “heads” when we see one, this coin sometimes is holdered or depicted reverse first.

The only way to tell (without researching who designed the reverse) is by remembering placement of common devices on circulating coinage. In this case, the legend, denomination and E PLURIBUS UNUM surround the patriot. Hence, the patriot is on the reverse.