Simple ad flyers start a revolution in the numismatic marketplace 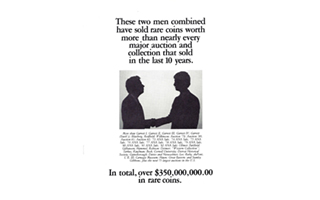 Two ephemeral flyers, one announcing a new firm (shown) and the other an offer for small cents, started a revolution in the numismatic marketplace.

In the past two columns, we have examined a book that changed everything (Mint Marks), and a catalog (Lester Merkin’s sale of the Helfenstein Collection), that did the same.

This week, we’ll discuss two simple ephemeral flyers that started a revolution in the numismatic marketplace. “Ephemera” is a term used to describe a wide range of literature that is not meant to be saved: things like advertising flyers, pamphlets, and brochures.

The ephemeral documents illustrating this column, however, are well worth keeping, for the seismic shift they heralded still rumbles through the rare coin market.

Today, Heritage Auctions is, far and away, the largest rare coin dealer in the United States, with annual sales that exceed those of their top competitors combined. But that wasn’t always the case.

You might recognize the two profiles in the illustration (especially if you’ve ever been on a dimly-lit coin bourse floor), as Jim Halperin on the left, and Steve Ivy on the right. Ivy became a coin dealer in 1964, at the age of 14, while Halperin joined the trade in 1968, at the age of 16.

These two precocious Baby Boomers first met at a small coin show in New England in 1970. They quickly became friends, but that didn’t prevent their respective firms, Steve Ivy Rare Coins and New England Rare Coin Galleries, from vigorously competing with each other for collectors’ business.

Nonetheless, in 1977, they began talking about the possibility of merging their businesses. The rare coin market was white hot in the late 1970s and into 1980, but then it cooled off dramatically. By 1982, the market was in a deep freeze, and it was at that grim moment when Ivy and Halperin decided to pull the trigger on their merger.

The silhouetted flyer, mailed to customers of both firms in July of 1983, announced that decision to the world. The combined company set up shop in Dallas, and Heritage’s exceptional growth and diversification soon followed.

And today, coins are only one of 30 collectibles categories sold by Heritage Auctions, ranging from comic books to the fine arts. Today, 21 years after the merger, Steve Ivy and Jim Halperin remain at the helm of the company.

Our second piece of Heritage ephemera was included in the same mailing as the silhouettes: “The First-Ever 16 Special Offerings from Heritage.” Offer Number 1 consisted of 1862 and 1863 Indian Head cents — the very first coins sold by the largest numismatic company on our continent. Such a distinction adds a fascinating “pedigree” to any coin.

Are there any Coin World readers who still own the very same 1862 or 1863 Indian cents they bought 21 years ago from this ephemeral offering that so profoundly changed the world of coins?