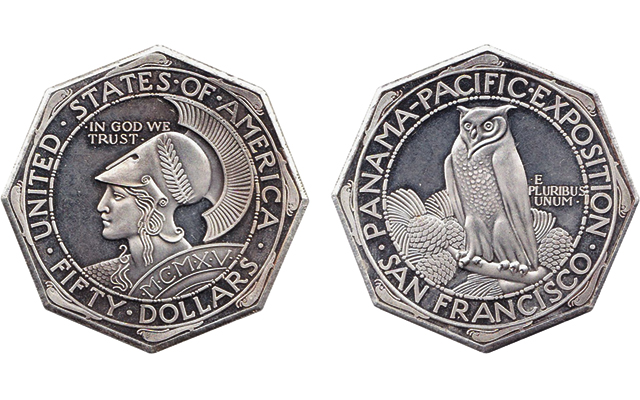 Privately issued 5-ounce .999 fine silver medal bears designs similar to those of the 1915-S Panama-Pacific International Exposition octagonal $50 gold commemorative coin, but without the S Mint mark on the reverse.

We have been unable to find this coin listed in Coin World’s Coin Values: a 1915-S Panama-Pacific Exposition $50 piece in silver, octagonal, approximately 5 ounces, 2.125 inches, struck in San Francisco, 27,000 struck.

Do you have any information on this piece?

Reader Baker appears to own a privately issued medal that bears designs replicating those that appear on the 1915-S octagonal gold $50 commemorative coin struck by the San Francisco Mint in celebration of the Panama-Pacific International Exposition.

Baker’s piece, however, does not bear the S Mint mark of the San Francisco Mint that appears on the original octagonal gold pieces, on the reverse, just above the pine cone to the right of the owl.

No markings or other indicators are visible in the images sent of the medal that would suggest who manufactured the piece.

The Panama-Pacific International Exposition $50 coin designs are popular with issuers of private bullion pieces. Multiple versions have been made and issued, presumably by more than one manufacturer.

In follow-up questions with Coin World, Baker said that he inherited the piece and had no supporting documentation that would help identify the piece. He also indicated that one segment of the edge was marked with a serial number “S/N00361.” Baker indicated the remaining seven of eight edge segments bear a reeded edge.

On Aug. 13 on eBay, a silver piece similar to Baker’s was offered by a seller from Poland. The piece was being offered with an opening bid of $399. The piece was described as 62 millimeters in diameter, weighing 5 ounces and composed of .999 fine silver.

The edge devices, however, were different. While one of the eight sides had the edge marked incuse as S/N01401, another segment was incuse-marked 5 T.O. 999 SILVER, with the remaining six sides bearing a plain edge.