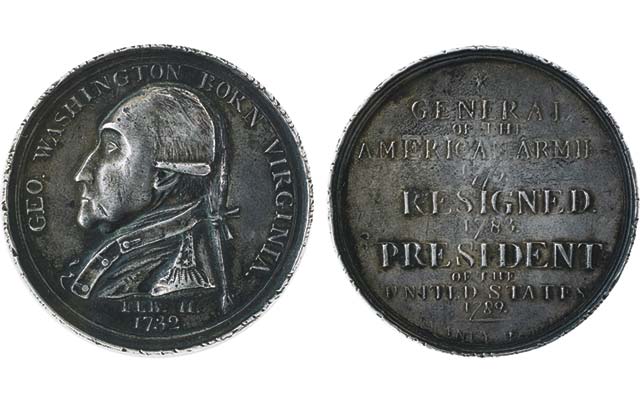 One of five known examples of the Baker 61 variety of Manly medal in silver will be sold at auction April 15 in New Jersey.

A 1790 J. Manly Co. medal that has been in the same family since at least the mid-19th century, one of just five examples reported extant in silver, will cross the auction block April 15.

The medal is one of 160 lots of coins, paper money, and other numismatic material to be offered by Rago Arts & Auction Center in Lambertville, N.J.

The Manly medals, struck in different metals by J. Manly Co., feature on the obverse a portrait left of Gen. George Washington in his military uniform with the inscription GEO. WASHINGTON BORN VIRGINIA / FEB. 11, 1732.

The medal, identified as having been struck with the first obverse, is attributed as the Baker 61 variety by W.S. Baker in Medallic Portraits of Washington.

Some 60 years later, circa 1850, the obverse was modified by another engraver and new medals were struck with the second obverse.

Chris Wise, director of the auction firm’s Silver Department, said March 27 that the silver Manly medal was brought to the company in January during one of its Monday free appraisal days by two brothers who run a local landscaping company.

Wise said the two brothers indicated they can trace the coin’s ownership as far back as the 1850s when it was owned by one of their great grandfathers.

Wise said he suspected the medal might be silver and submitted it to Numismatic Guaranty Corp. for authentication, grading, and verification of metallic content.

Wise said the edge has the appearance of someone manually trying to cut reeds into the normally plain edge. He added that the medal exhibits a uniform patina across its surfaces, including the edge.

Cassady Rubins, administrator/cataloger, Decorative & Fine Arts, Silver, Coins/Currency, for the auction firm, said via email March 27 that the medal was reported to have been found in the home of the brothers’ grandmother, Margaret Bennett Potts, after her passing.

Mrs. Potts is reported to be a descendant of a family of ironworkers, including Dr. Jonathan Potts and Isaac Potts.

The Potts family ironworks, Valley Forge, was owned by the family during the time Washington made it his headquarters from 1777 to 1778. It was Isaac Potts who sheltered Washington and his 11,000 troops.

Two Baker 61 Manly medals in silver are in the collection of the American Numismatic Society Collection in New York City.

One example was donated in 1965 by renowned numismatist Mrs. R. Henry Norweb Sr.

The second example was donated in 2009 by numismatist Roger S. Siboni. Siboni’s donation is the Choice Extremely Fine piece from the Ford II sale.