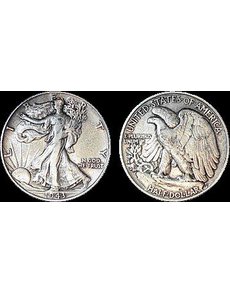 This 1943 Walking Liberty half dollar was among 20 half dollars of that design discovered while searching the contents of rolls. Franklin and Kennedy silver half dollars were also found in the searched rolls.

As a roll searcher, I find that the holiday season has the potential to be the best time of the year for finding large amounts of silver in rolls.

The anticipation that I feel every time I open up a roll of half dollars is similar to the excited feeling that I get just prior to unwrapping an unexpected Christmas gift.

Well, during the past month of searching, I discovered an incredible number of silver half dollars in rolls.

Of course, as roll searchers we all want to know what a pile of silver like that is worth, so let’s do the math.

At the time of this writing, the price of silver is about $34 per troy ounce.

I am always amazed at the amount of silver that can still be found in rolls of half dollars that you can obtain at your local banks or credit unions.

Please share your finds with me by going to my site located at www.askaboutcoins.com and using the Submit Question button.

Good Luck in your searching and Happy Holidays!