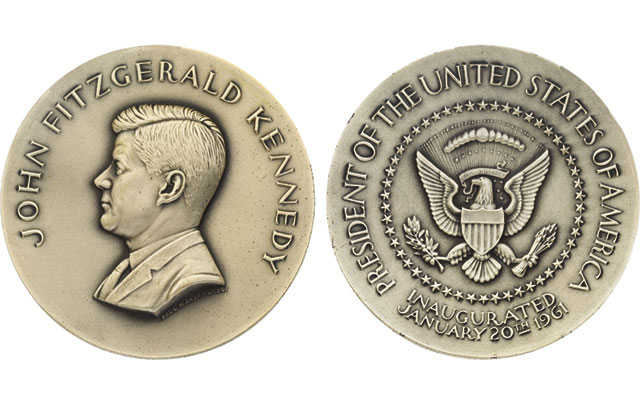 While public auctions featuring bronze examples of the 70-millimeter John F. Kennedy official presidential inaugural medal are sporadic, offerings of the same medal struck in silver are even less frequent.

Heritage Auctions is offering in its Nov. 8 Americana & Political Signature Auction one of the 7,500 silver medals with an antique finish that Medallic Art Company is known to have struck and sold.

The silver Kennedy official inaugural medal in the Nov. 8 sale is numbered 5878 incuse on the edge.

The 70-millimeter silver medals contain an average weight of 5.5 ounces of .999 fine silver.

MACO also struck and sold 53,331 of the 70-millimeter medals in a bronze composition.

The Kennedy medals were designed and engraved by sculptor Paul Manship.