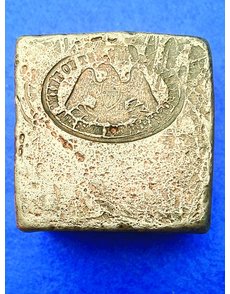 Eagle with shield design is punched on the bottom of the silver cube. 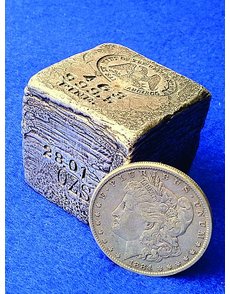 Another of the three faces of the silver cube punched with an inscription is shown next to an 1884 Morgan dollar for size perspective. 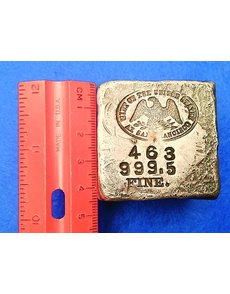 One face of a silver cube bears an oval-shaped punch featuring an eagle with shield on breast and inscription MINT OF THE UNITED STATES AT SAN FRANCISCO.

All images courtesy of Cybercoins.net.

Two Pennsylvania coin dealers are trying to determine the history behind a cube-shaped silver ingot punched twice with a San Francisco Mint eagle punch. The ingot also puzzles a specialist in western and mining memorabilia.

Blaine Shiff and his brother Brad of Cybercoins.net say that in September 2011 a woman brought the silver cube to them at their store in a Pittsburgh suburb. She told the brothers that her uncle had owned the piece; when he died it passed to her and she had owned it for decades.

The woman had no other information and eventually sold the piece to Cybercoins.net, according to Blaine Shiff.

The cube measures approximately 44 millimeters per side, though Blaine said the cube’s measurements vary.

One face bears an oval punch displaying an eagle with shield on breast and arrows and olive branches in its talons. Around the inside of the oval is an inscription that reads MINT OF THE UNITED STATES AT SAN FRANCISCO. On the same face below the eagle punch are the numbers 463 and below that is a punched 999.5 FINE.

Another face has the inscription 28.01 OZS punched into the metal.

A third face has the image of the oval punch with eagle design but no other inscriptions. The other three faces of the cube are blank.

In an effort to identify the cube’s origins, they took it with them to the November Whitman Coin & Collectibles Baltimore Expo. “A whole string of Americana experts wanted to see it,” Shiff said, adding that no one they talked to had ever seen anything like it.

To try to find out information about the origin of the silver cube, Brad Shiff spoke with Fred Holabird at the 2012 Florida United Numismatists convention in Orlando. Holabird is a mining geologist by trade and a specialist in western mining history.

Holabird said the cube-shaped ingot was most likely made at the San Francisco Mint sometime between 1944 and 1964. Holabird said he examined the piece at the FUN show and had a couple of cautionary comments.

He said the cube shape is an unusual shape for an ingot and he has not seen that shape before in a modern U.S. Mint ingot.

“It might not even be an ingot mould,” Holabird told Coin World, adding the use of a nonstandard mould does not automatically mean the piece is a fake.

Holabird said the cube appears to be made from multiple cold pours of silver, meaning hot metal had been poured onto cold metal. Once the layer of hot metal cooled, another layer was added at a later date, with the process repeated multiple times.

Holabird counts as many as 15 pours in the top half of the cube at just under 1 ounce per pour.

Holabird said that some older employees at the San Francisco Mint have said small ingots were made from metal cut from other silver ingots for assay tests (chips would be cut from the corners of ingots for testing). Those ingots “have a consistent smooth pour, typical of [the use of] a standard furnace for smelting.”

He said that the ingot may have been made from samples recovered via a process in which a vacuum tube is inserted into the melt. Such vacuum samples could result in the recovery of more metal than needed for testing.

“Standard chip sampling would not produce that amount of sample, and other known existing bars support the idea of the vacuum tube sampling method,” he said.

He said the number 463 might be the ingot number, although it may be in the incorrect position.

Holabird also noted that there is “no batch number on the side” which he said seems suspicious to him. A batch number is a number assigned when multiple ingots are poured from the same melting pot. Each ingot would have an individual number but all ingots from that melting pot would bear the same batch number.

He said he cannot remember seeing an ingot with a second eagle Mint punch before. ¦