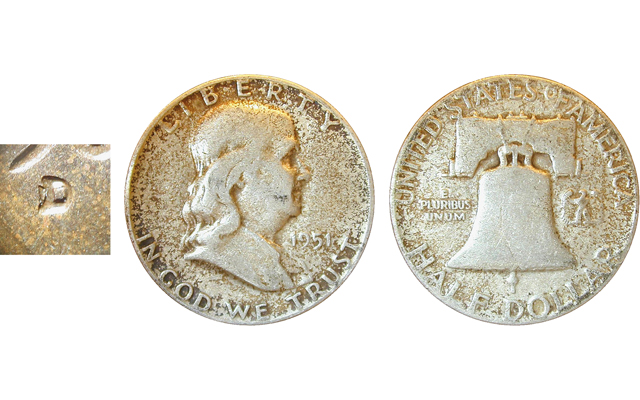 At left, a close-up of the D over horizontal D Mint mark on a 1961-D Lincoln cent variety. At right, a 1951 Franklin half dollar is a valued find as a silver coin, though it has a dark stain.

I am thrilled that I have been able to share my finds with you for 15 years.

As we enter 2015, I am truly excited to add the following finds to my collection!

As much fun as I have finding cool coins in rolls, I have even more fun sharing my finds with you!

You would think that finding silver coins in rolls would be a thing of the past, yet a single roll of what I expected to be all copper-nickel clad Kennedy halves turned out to have several 90 percent silver Franklin half dollars inside it.

When I opened the hand-wrapped roll of coins I discovered three relatively worn and stained pieces. The coin that was stained the least is the 1951 Franklin half dollar.

The other two examples half dollars, dated 1952 and 1954, were extremely dark in color.

I suspect that the coins’ colors were more due to wear and many years of toning and not due to having been buried in soil or having been under water for any length of time.

I bring that up as I have found silver coins in rolls that have been in by both situations. Those coins have a thick, dark crust on the surface, not simple dark toning or spots such as the coins I discovered this time.

In any case, silver is silver, and I enjoyed finding these half dollars no matter what they looked like.

I love finding die varieties, too, and my next fun find came to me as I searched through rolls of cent coins.

I found a 1961-D Lincoln cent with a Mint mark die variety.

My copy of Cherrypickers’ Guide to Rare Die Varieties of United States Coins, Fifth Edition, Volume I by Bill Fivaz and J.T. Stanton, lists this coin on page 132 as a Repunched Mint mark variety.

Combined Organizations of Numismatic Error Collectors of America lists this piece as CONECA: RPM-001 in its listings of die varieties.

This very popular die variety is known as a 1961-D over horizontal D. The secondary D can be seen to the left of the primary D turned about 90 degrees.

It’s not that rare as Mint mark varieties go, but it is very dramatic in appearance and I really got a kick out of finding this particular one in circulation.

If you are not a roll searcher, you should be! There is nothing better than finding collectible coins for face value in rolls of coins that you can obtain at your local bank.

Give it a try!