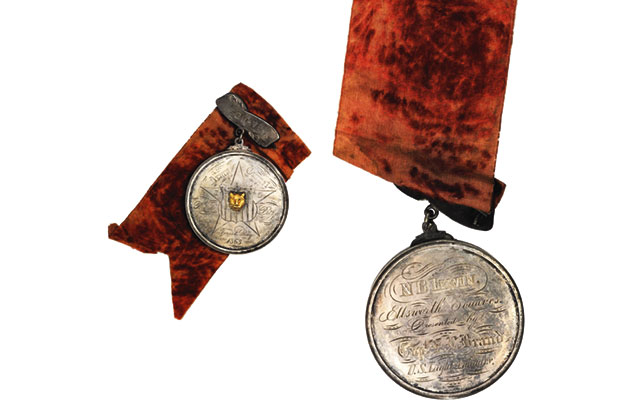 The badge, in Extremely Fine without hanger, is one of 2,756 lots to be offered Feb. 5 and 6 by Stack’s Bowers Galleries in their February 2015 Americana Auction. Additional lots are being offered Feb. 10 by Internet only.

Irwin’s third place marksmanship award was presented by Capt. E.F. Brand of the U.S. Light Infantry for Irwin’s skill at a June 25, 1863, contest at Forest Bay.

An unusual feature of the obverse design is the gold-inlaid lion's head, in the center of the large star that dominates the design. The reverse bears the recipient's engraved name and presentation information.

Although the marksmanship contest was held while the Civil War was still on, it came after the 11th Regiment had mustered out, which took place June 2, 1862.

The regiment became known as “Ellsworth’s Fire Zouaves.” The unit was formed from volunteer New York City firemen, and Ellsworth, a student of military history, admired the Zouaves, Algerian troops fighting with the French Army in North Africa. He used their training methods with his cadets and designed a uniform with baggy trousers in the Zouave style, according to the SmithsonianMagazine.com.

Ellsworth, an attorney before the war’s outbreak, was shot dead May 24, 1861, by the owner of the Marshall House hotel in Alexandria, Va., after Ellsworth removed a Confederate flag from the front of the hotel.

One of Ellsworth’s men, Cpl. Francis E. Brownell, avenged the officer’s death by shooting the hotel owner, an action for which Brownell was awarded the Medal of Honor on Jan. 26, 1877.

For more information on the badge, visit the auction lot description here.