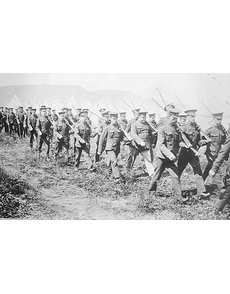 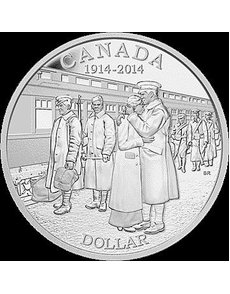 Canada’s annual silver dollar for 2014 poignantly marks the centennial of World War I.

Few scenes of war are more poignant than a family sending a loved one off to battle, a scene now captured on a new Canadian coin.

The familiar image appears on Canada’s 2014 annual silver dollar, commemorating the centennial of Canada’s entering World War I on Aug. 4, 1914. The coin goes on sale to the public on Jan. 14.

What was a force barely 3,000 strong soon swelled to 33,000 as people across Canada enlisted.

Bonnie Ross’ reverse design captures a couple’s emotional farewell at a train station, where the first wave of enlistees boarded to head to Canadian Forces Base Valcartier in Quebec.

According to the RCM, “Train stations around Canada became the stage for tearful goodbyes and lingering embraces. The First World War was a true coming of age for the young nation, and the hope, fear, courage and deep sacrifice Canadians felt 100 years ago remain as poignant and inspiring today.”

The reverse design appears on three .9999 fine silver versions: a Brilliant Uncirculated coin, a Proof version and a selectively gold-plated Proof version available only in an annual Silver Proof set.

The silver dollar weighs 23.17 grams and measures 36.07 millimeters in diameter.

The Silver Proof set contains .9999 fine silver versions of all six of Canada’s circulating coins (including selectively gold-plated $1 and $2 coins) in their standard designs, plus the commemorative silver dollar. It has an issue limit of 25,000 sets. Each set retails for $229.95 Canadian.

Mintages and pricing remain the same as for the 2013 issue.