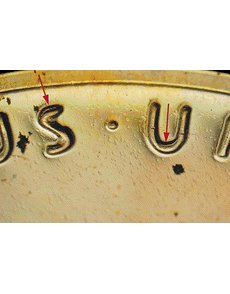 This Proof 1953 Lincoln cent with doubling on the upper reverse was submitted by Robert Pelletier. 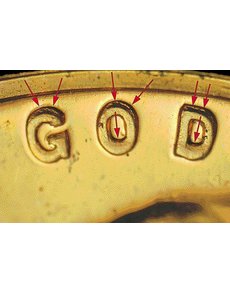 Cody Anderson submitted this Proof 1956 Lincoln cent that shows strong doubling to the letters of IN GOD WE TRUST. 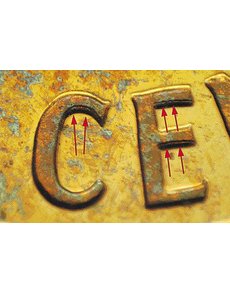 A Proof 1962 Lincoln cent from Marvin Young shows doubling on the lower reverse. 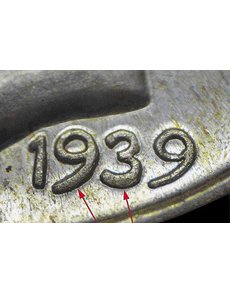 The first known Proof 1939 Winged Liberty Head dime with a doubled die obverse was submitted by Gil Medina. Note the extreme thickness on the lower first 9 and the 3.

Robert Pelletier kicked things off with a Proof 1953 Lincoln cent that has a doubled die reverse.

A close Class II spread toward the center shows on E PLURIBUS UNUM and the dots, where the spread decreases from left to right. Doubling also shows on the left wheat head and stem.

Listed in my files as 1953 1¢ Pr WDDR-001, it is the first doubled die reverse reported for the 1953 Lincoln cents and it is rare. Proof cent dies of this era were used to strike about 3,000 coins before they were retired, so it is highly unlikely that more than 3,000 examples of this variety exist.

Cody Anderson submitted a Proof 1956 cent with a strong obverse doubled die. Doubling spread toward the center along with extra thickness shows on IN GOD WE TRUST, LIBERTY and the date. I list it as 1956 1¢ Pr WDDO-002. It is listed as 2-O-II+VI by the Combined Organizations of Numismatic Error Collectors of America. Its estimated mintage is, again, 3,000 pieces.

Keeping the Proof theme going, Marvin Young submitted a Proof 1962 cent with a nice tripled die reverse. Doubling spread toward the center shows on the U of UNITED, ONE CENT, the CA of AMERICA, the designer’s initials, both cornices, and both Memorial bases. Close tripling is seen on the designer’s initials and the inside of the U of UNITED. This one is listed as 1962 1¢ Pr WDDR-032 in my files.

Rounding things out this month is a Proof 1939 Winged Liberty Head, Doubled Die Obverse dime from Gil Medina. Strong extra thickness shows on the date and the designer’s initials. Extra thickness also shows on IN GOD WE TRUST and slightly on LIBERTY. I list this as 1939 10¢ Pr WDDO-006.

Have you ever checked your single Proof coins or the coins in your Proof sets for die varieties?

You may have a pleasant surprise waiting for you!