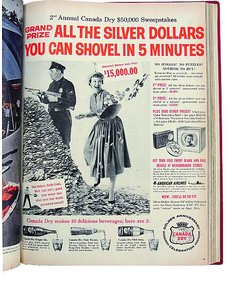 Every few months a local car dealership has a “tower of money” contest in which winners step inside a plastic cylinder and pluck whirling paper money from a vortex.

That would be neat, but in the late 1950s, Canada Dry advertised an even better promotion in which the grand prize was “all the silver dollars you can shovel in 5 minutes,” with a guaranteed minimum of $15,000.

I stumbled across an ad for the contest in an old Life magazine.

An illustration with an ad for the contest shows a policeman wielding a tommy gun as he guards an improbably high pile of coins while a woman, wearing a dress and hat, of course, shovels silver dollars into the air.

Second prize was two minutes of shoveling, third prize was a minute, and 5,000 runner-up prizes were individual silver dollars.

In the late 1950s silver dollars were just money — big, heavy money that few people liked. They didn’t circulate much, and spending one was like spending a $2 bill today. People would take it, but give you a funny look before setting it aside.

I started collecting coins about that time. Armed with the latest edition of A Guide Book of United States Coins (priced at $1.75 from the 1954-1955 through 1968 editions), I’d often go to the local bank to look through $20 rolls of silver dollars.

I was looking particularly for Morgan dollars – 1895, and the 1903-0 (which were super rare until the Treasury released bags of the 1903-O Morgan dollars in the early 1960s) and 1921 Peace dollars. I never found anything rare and — much to my current regret — remember placing the odd Carson City Mint dollar back into circulation.

The 1957 Canada Dry winner shoveled more than $30,000 during his five minutes of fame and manual labor.

Canada Dry likely paid its big winners with paper money. But wouldn’t it be neat it the winner took the prize in silver dollars and kept it.

Each silver dollar that was shoveled, though, is worth much more today.

Even the ugliest, most worn silver dollar is worth at least $37, according to Coin World’s Coin Values price guide.

If any of those coins had a CC Mint mark, the value is much higher. In Extremely Fine condition, the relatively common 1878-CC Morgan dollar retails for $150 today.

The “shovel-off” was televised on Dave Garroway’s Today show. There are a lot of ways to collect coins, but shoveling silver dollars on national television — well, that sounds about the best.