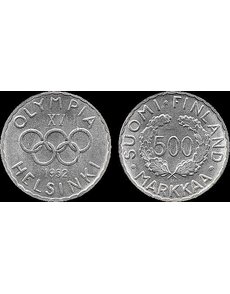 Coins produced in connection with the 1952 Games in Helsinki were in one of only three successful Olympic commemorative coin programs as of 1981.

At times, the collector community and the U.S. Treasury (read that U.S. Mint) are at odds with each other, akin to a family squabble. But when faced with an outside “threat” they put aside their differences and stand together. One such moment was July 14, 1981.

Outside observers had predicted S. 1230 and its companion bill, H.B. 3958, which called for the U.S. Mint to strike 29 commemorative coins to honor the 1984 Los Angles Olympic Games, would sail through Congress.

The legislation had the backing of the Olympic community and powerful members of Congress. But perhaps more significantly, the bills had been carefully shepherded by high-powered lobbyists funded by captains of industry, such as Armand Hammer.

The lead witness at the Senate Banking hearing that day was Treasurer Angela “Bay” Buchanan. She took issue with the fact that the proposal, as written, would put the sales and marketing of the coins in the hands of a private entity, beyond the scrutiny and oversight of the Treasury.

Those pressing for the private marketing scheme may have been successful had not two prominent and respected members of the numismatic community buttressed Buchanan’s testimony.

George D. Hatie, president of the 37,000-member American Numismatic Association, was an astute collector and a skilled lawyer. He used his legal training to highlight inconsistencies and pinpoint problems. For example, he noted that the formula for establishing the specified surcharge of 15 percent on either the face value or the cost of manufacture of the coins, whichever was greater, excluded the cost of gold or silver in calculating the surcharge.

Even more compelling was his practical observation that the cost of acquiring a complete set to a collector “could well be in excess of $5,000.”

Considering that most collectors in 1981 were spending less than $250 a year to keep their collections complete, Hatie raised for the first time the specter that Olympic planners could be overly optimist on their anticipated sales and profits.

Hatie said from his own perspective that 29 coins depicting a single event would not appeal to him and he would lose interest in collecting the entire series.

Publisher Chester L. Krause also testified, presenting research his staff had conducted that directly contradicted Olympic officials touting the massive Olympic issues of Canada in 1976 and the Soviet Union in 1980 as programs to emulate. Krause asserted that only three Olympic coin programs had been successful: those produced for the Helsinki Games in 1952, Tokyo in 1964 and Mexico in 1968. Each had produced fewer coins, but had sold out. The later Olympic programs, such as Montreal and Moscow, had issued large numbers, but had sold far fewer coins.

Beth Deisher was editor of Coin World for 27 of the 31 years she was on the publication’s staff. Email her at Beth@CashInYourCoins-Book.com.