The Draped Bust half dollar series is one of the shortest in the history of American numismatics, but still represents a monumental challenge to complete by varieties, in either A Guide Book of United States Coins (“Red Book”) by R.S. Yeoman or United States Early Half Dollar Die Varieties, 1794-1836 by Al C. Overton, edited by Donald Parsley.

Draped Bust half dollars were first minted in 1801. The series ended in the middle of 1807 before John Reich’s Capped Bust series began. During those seven years, just over 1 million coins were issued from 62 (known) Overton die marriages. The Red Book lists 15 major varieties for the series.

All of the coins have a lettered edge that was imparted onto the planchet by the Castaing machine prior to the striking of the coins.

The application of the edge lettering also upset the rims of the planchet to protect the central devices from wear.

The lowest mintage of the series is for 1802; the most prolific year, 1806. The year 1802 is represented by only one die marriage. 1806 has 30 die marriages, including seven at the Rarity 7 (four to 12 known) and Rarity 8 (one to three known) levels. The 15 Red Book varieties are made up of a basic listing of the major die marriages.

Of the 15 listed coins, only the 1806 Draped Bust, Knob 6, Stemless Reverse half dollar is a challenge to collectors. The other coins can be obtained without an undue amount of searching, but original, unmolested examples will be difficult to locate for any of the coins. The 1801 and 1802 coins are all scarce and a healthy premium will be charged for the 1805/4 half dollar.

The aforementioned Draped Bust, Knob 6, Stemless Reverse coin (Overton 108) sells for $20,000 and up. Most collectors can expect to obtain 14 of the 15 listed coins with patience and a moderate budget, depending on the condition of the coins!

The complete Overton die marriage set is unobtainable, as it includes four each R-8 and R-7 marriages. Advanced collectors will find tackling this series a challenging, but rewarding, experience, as the following date-by-date analysis suggests:

The Draped Bust series also was plagued by massive die failures centering on the years 1805 and 1806. Large die cracks are seen on many marriages, and a number of them are seen with cuds (raised areas of metal that formed on the coin when a piece of the die broke out leaving a void during striking).

Draped Bust half dollars offer a challenge to the collector willing to devote himself or herself to the series. Achieving relative success will take the better part of a collecting lifetime, without a chance of completing the entire Overton collection. 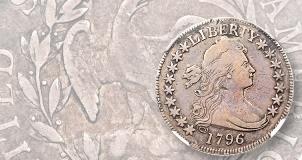 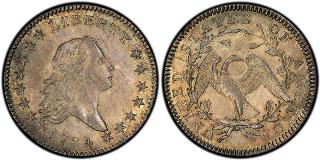 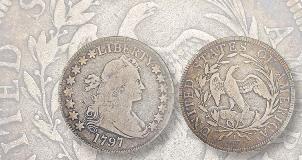