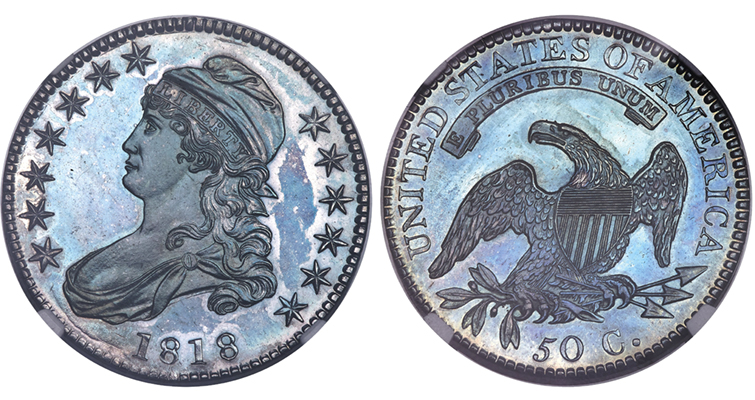 June 25 update: The described coin has been removed from the Heritage auction at the request of NGC. Original caption: A Proof 62 1818 Capped Bust half dollar represents the O-107 variety and will be offered at Heritage’s July 11 to 14 Summer FUN auction in Orlando. 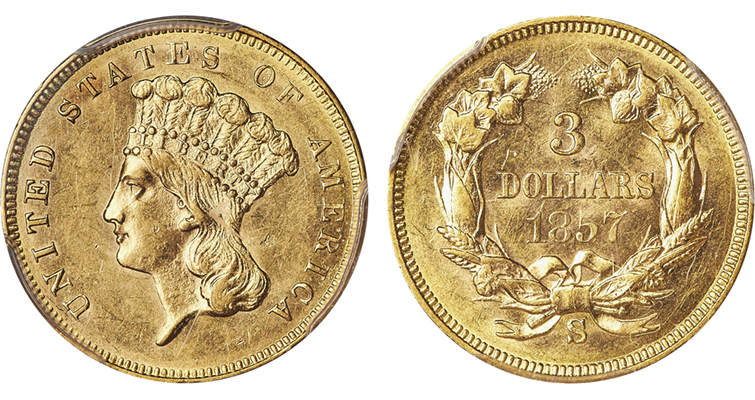 Most of the 14,250 $3 pieces minted at the San Francisco Mint in 1857 were released into circulation, but the offered example “retains most of its original semireflective surface on the obverse, while the reverse is lightly frosted across its smooth fields.” 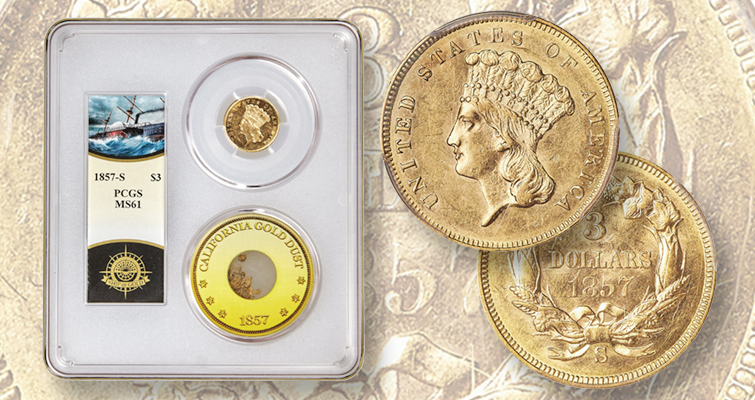 An 1857-S Indian Head gold $3 piece recovered from the SS Central America treasure is graded MS-61 by PCGS and is housed with a pinch of gold dust from the treasure in an oversized holder.

Florida United Numismatists is holding its Summer FUN show July 11 to 13 at the Orange County Convention Center in Orlando, and as it does with the annual January FUN shows, Heritage will be hosting the official auctions.

The continued recovery of gold coins from the SS Central America treasure keeps shipwreck gold in the headlines, and grading services have created new slabs to better market these historical finds. The encapsulation for an 1857-S Indian Head gold $3 coin from the wreck, graded Mint State 61 by Professional Coin Grading Service, contains in a separate section of the slab a pinch of gold dust also recovered from the treasure. The back of the oversized holder features the signature of Bob Evans, chief scientist and historian of the shipwreck recovery team, confirming the gold dust and coin are both from the SS Central America.

1857-S Coronet double eagles made up the bulk of the numismatic finds, but the discovery of a few 1857-S Indian Head $3 coins dramatically changed the population of Mint State survivors among examples of that coin. Gold specialist David Akers wrote in 1988 that he had not seen any Mint State survivors, and today just 11 pieces are certified in Mint State grades by PCGS and Numismatic Guaranty Corp., with more than half being from “The Ship of Gold.”

Most of the 14,250 $3 pieces minted at the San Francisco Mint in 1857 were released into circulation, but the offered example, “retains most of its original semireflective surface on the obverse, while the reverse is lightly frosted across its smooth fields. Both sides show light, hair-thin abrasions and a few tiny marks.”

Update added at 1:33 p.m. June 25: According to Heritage, the 1818 Capped Bust half dollar profiled here was removed from the Heritage auction at the request of Numismatic Guaranty Corp. and with the approval of the consignor. The coin has been returned to NGC for review.

Another delicacy is an 1818 Capped Bust half dollar graded Proof 62 by NGC. It is one of three known Proofs of the Overton 107 variety in Al C. Overton’s book Early Half Dollar Die Varieties 1794-1836, existing along with three additional examples of other die marriages.

Like the gorgeous NGC Proof 65 example that brought $61,687.50 in the Sept. 30, 2015, Pogue II auction, the subject offering is an early die state with a bulge at the top of the obverse bust, the remains of an effort by Philadelphia Mint workers to efface two lines left of the 1 in the date. This bulge was mostly lapped away on later strikings for circulation. Another O-107 Proof 1818 Capped Bust half dollar, graded NGC Proof, Cleaned, sold for $18,000 at Heritage this past November.

These early Proof coins remain an area ripe for research. As Stack’s Bowers Galleries and Sotheby’s noted in the Pogue II catalog, “While some cents dated 1817 have been accorded some measure of respect as Proofs, PCGS has traditionally been reticent to certify any Proof coin dated earlier than 1821 as a definitive Proof. In that year, enough Proof cents were made to derive a standard measure of ‘Proofness,’ a baseline defined by numerous data points. Before 1821, clear efforts were being made at creating Proof strikes, but the data is more disparate, the dots more difficult to connect.”

The coin in the auction has a striking blue color. Heritage writes, “A brilliant and razor-sharp half dollar with mirrored fields and bagmark-free surfaces,” adding, “Both sides exhibit delicate vertical hairlines.” 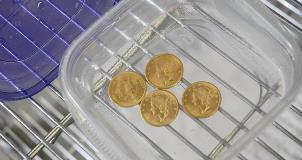 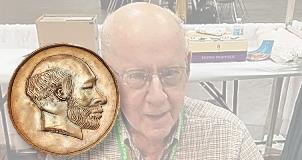 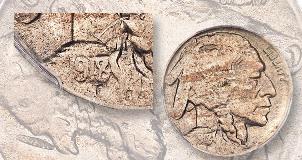