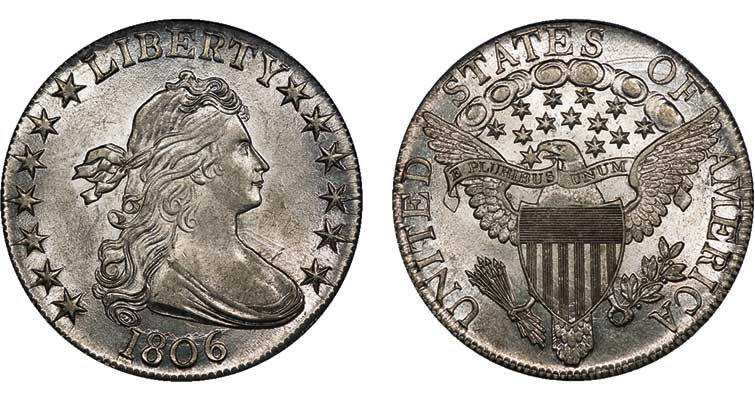 The 1806 Draped Bust, Pointed 6, No Stem Through Claw half dollar is graded PCGS Mint State 62. 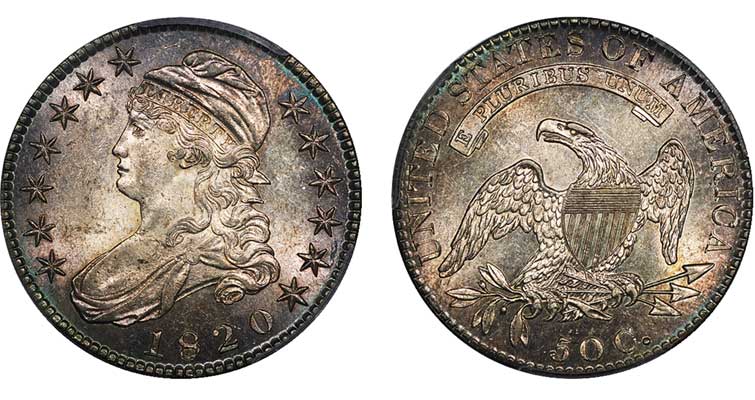 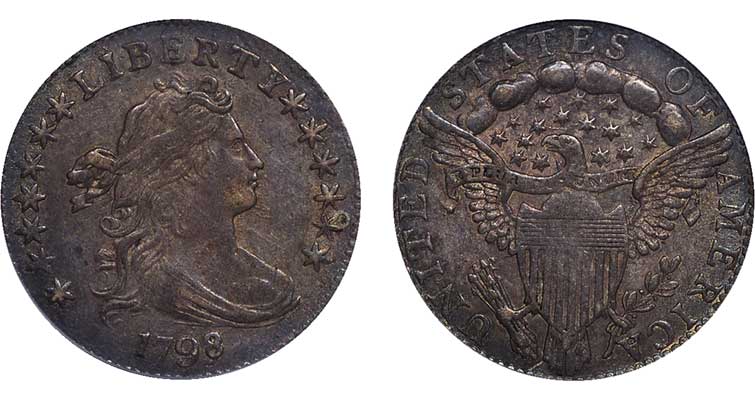 One of two Draped Bust dimes in the sale is this 1798/7, 16 Stars Reverse coin graded PCGS About Uncirculated 50.

The sale closes at 7 p.m. Central Daylight. The sale is being held in conjunction with the American Numismatic Association World's Fair of Money Aug. 11 to 15 in Rosemont, Ill.

Among the coins featured is an 1806 Draped Bust, Pointed 6, No Stem half dollar attributed as the O-109 variety (as cataloged in Early Half Dollar Die Varieties 1794-1836 by Donald L. Parsley, expanded and revised from the original work by Al C. Overton).

The coin, once part of the Dr. Charles Link Collection, is graded and encapsulated Mint State 62 by Professional Coin Grading Service. The coin has a pre-sale estimate of $10,000 to $12,000.

The variety is recognizable by the pointed tip of the 6 in the date and the absence of the stem of the branch extended through the eagle's claw.

The example of this half dollar variety in Downey's sale is graded PCGS MS-62. The coin was once in the collections of numismatists Elton Dozier, Gehring Prouty, Charles De Olden and Steven Nomura.

On the obverse, the numerals in the date are widely spaced and tall. The top of the 2 ends with a knob and the bottom of the digit exhibits a square base. On the reverse, the numeral 5 in the denomination is tipped sharply to the right.

Four varieties of 1798 dimes are known from a reported mintage of 27,550 coins executed using three obverse and four reverse dies.

A 10-percent buyer's premium will be added to the final closing price of each lot won.

Complete details of the sale, including descriptions and color images of each coin offered as well as rules applying to tie bids and bid reductions, can be found on Downey's website.