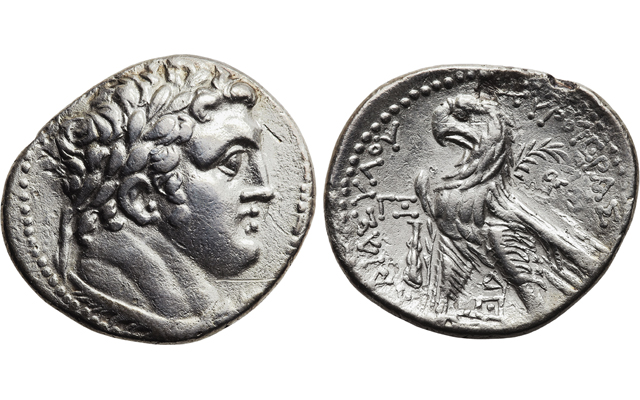 You should see the faces of the kids when I put a coin in their hands that may have been on a money changer's table at the temple when Jesus expelled them, like this shekel of Tyre. It never ceases to amaze the kids.

I began collecting coins in 1964, much like many of my contemporaries, plugging holes into Whitman Folders. My interest began looking through an old cigar box of coins that my grandmother kept in her dresser. She lived with us until her death, commonplace for that day and time, but very foreign to today’s families, almost as foreign as an old box of coins for children to marvel at and experience.

Where does that leave us as a generation of collectors looking to share our experiences with the next generation? Where will William Sheldon’s old box of aged coppers from a bygone era come from? Sheldon wrote the tome for large cent attribution by die marriage for 1793 to 1814 (Penny Whimsy). In the introduction he tells of his fascination with the series, based on his father’s accumulation of old coppers. Without that small group of coppers, where might the hobby be today?

The old cigar box full of coins kept at home by the survivors of the Great Depression has been dispersed throughout the collecting community by the next generations of owners. That “home bank” of old and unusual coins has given way to a few more dollars in the savings account, investment account or even a night on the town. The thought of keeping something of value on hand for emergencies is no longer a forethought of the current generation, one that has not known the hard times of our forefathers.

The talismans of the cigar box began many a generation of collectors. Where will the inspiration come from for the next generations? Without our sharing our collections, there will be a void in the collecting community. How can we foster the wonderment we found in that old box?

Put a few old coins in your pocket to show and share on a regular basis. If someone shows an interest, make a gift of a couple small pieces to plant the seed of collecting. You can volunteer to talk at your local schools and libraries about the history connected with collecting.

Tying physical items to history is fascinating to young minds. You should see the faces of kids when I put a coin in their hands that may have been on a money changer’s table at the temple when Jesus expelled them.

My favorite thing is to ask a person’s favorite person from history and then put a coin relevant to that person in their hands. It never ceases to amaze them.

My challenge to each of you is to share your enthusiasm with the hobby with at least one new person each month for the New Year. We may just be developing the next generation of collectors who will be the purchasers of our collections.