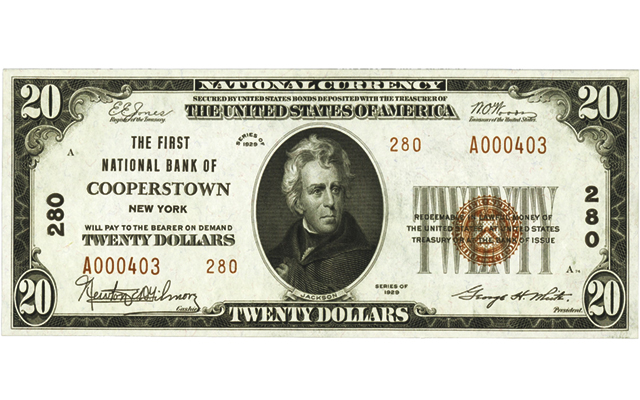 As a nod to the home of the National Baseball Hall of Fame in Cooperstown, N.Y., this Series 1929 $20 national bank note issued by The First National Bank of Cooperstown might be a nice addition to a collection with a baseball theme. This note, graded Gem Uncirculated 65 Exceptional Paper Quality by Paper Money Guaranty, sold for $734.38 at an April 2013 Heritage auction.

Though no baseball equipment or players are depicted, paper money collectors will quickly recognize the significance of a note from Cooperstown, N.Y. It’s the home of the National Baseball Hall of Fame and Museum.

The organization opened in 1939 and is the repository for memorabilia related to baseball. The Hall of Fame showcases the many players, managers, umpires, executives and pioneers of the sport who have been inducted into the hall. The museum is a destination spot for many lovers of the game.

So why not add a national bank note issued by The First National Bank of Cooperstown to your collection?

A Series 1929 $20 note issued by the bank would make a fun addition. The bank was chartered in 1864 and issued both large- and small-size notes. By the time the bank closed in 1935, when the national bank note era ended, it had issued $2,805,960 worth of notes, according to National Bank Notes by Don C. Kelly.