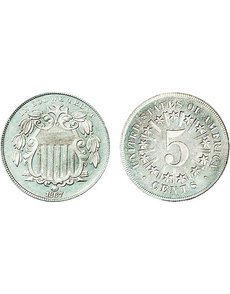 The glittering Proof 1867 Shield, With Rays 5-cent coin illustrated here is similar to the one the writer bought for $610 in 1955. Today, it would be worth tens of thousands of dollars.

As I write these words, I am completing my plans to attend the World’s Fair of Money, the American Numismatic Association summer show, in Rosemont, Ill.

If you plan to be there and want to say “hi,” you can track me down at the Stack’s Bowers Galleries bourse setup or at the Whitman Publishing show booth. It is always nice to meet and greet Coin World readers.

This week I tell more about my experiences at my very first ANA summer show — back in August 1955 in Omaha, Neb. There was no pricing source except the annual A Guide Book of United States Coins, no published grading standards, lots of altered and counterfeit coins, and the like. I and other dealers were on our own. To “survive,” we had to have grading, marketing and other skills. This, of course, was very challenging and enjoyable!

Today, certified coins, electronic pricing sources and more make it possible for just about anyone to be a coin dealer. No knowledge or experience is needed.

I tried to learn as much as possible, including from my elders. By 1955, I had become acquainted with dealer Abe Kosoff, one of the most highly regarded in America, who had supplied me with pattern pieces, for several years.

I believe that other than collector Dr. J. Hewitt Judd, I was his best customer. Mr. Kosoff, as I called him at that time, said the Professional Numismatists Guild, which he founded in 1953, was to be “official” as of the 1955 convention, with its first meeting to be held there. “When you are of legal age I will propose you as a member,” he said. That did happen, and years later, in 1977 to 1979, I was president of the PNG. After Abe’s passing in 1983, his family tapped my company to auction his estate coins.

In contemplating the 1955 convention auction by Bebee’s, I knew from study that the 1867 Shield, With Rays 5-cent coin was rarer than generally thought. At the sale, I captured a gem example for $610, a record price. This caused a great sensation at the time — a little kid paying $610 for a 5-cent coin! This augmented my reputation that I would pay ridiculously high prices. As a result I was continually offered things by other dealers.

The secret was that I tried to buy very carefully, with knowledge of what I was doing. This did not always work out, but usually I made a profit.

As to the famous 5-cent coin, along came O.L. Harvey, who asked if I would take a profit, and I did. It was gone within a few hours after I bought it!