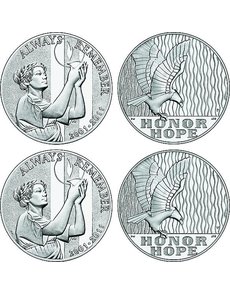 In 2011, the United States Mint began selling official commemorative medals commemorating the 10th anniversary of the terrorist attacks of Sept. 11, 2001.

The West Point Mint strikes of the 2011 National September 11 Memorial and Museum commemorative medal released for sale at noon June 20 appear to be more popular with the public than their counterparts struck at the Philadelphia Mint.

Coinciding with the noon sales launch, Treasurer of the United States Rosa “Rosie” Gumataotao Rios joined U.S. Rep. Jerrold Nadler, D-N.Y., at the 9/11 Memorial Preview Site near the World Trade Center site to officially launch the sales. Nadler introduced the enabling legislation in the House, which was approved and signed into law Aug. 6, 2010.

The medals authorized are in commemoration of the 10th anniversary of the Sept. 11, 2001, terrorist attacks on the United States and the establishment of the National September 11 Memorial and Museum at the World Trade Center.

The act calls for the production of up to 2 million 1-ounce silver medals in Proof, with production divided between the Philadelphia Mint and the West Point Mint. Each medal will bear either the P or W Mint mark to indicate the facility where the medal was struck. The Mint mark appears in the lower right portion of the reverse at the 4 o’clock position.

The division of production for each facility will be determined by how the orders are placed. Customers may order examples of the medal from one or both facilities, with no household limits on how many of each medal may be ordered.

Shipping of the medals to the customers who ordered them will not begin until Sept. 1.

The introductory sales period began at noon June 20 and runs through 5 p.m. EDT after which regular issue prices will be charged.

The purchase price of each medal includes a $10 surcharge that will be paid to the National September 11 Memorial and Museum, a private not-for-profit organization overseeing the design and funding of the memorial and museum at the World Trade Center site. The funds will support the museum’s operations and maintenance once it is completed.

During the June 20 ceremony at the 9/11 Memorial Preview Site, 20 Vesey St., Lower Manhattan, Rios and Nadler presented a shadowbox containing an example of one of the medals to Joe Daniels, president and chief executive officer of the National September 11 Memorial and Museum.

The initials of all three artists — dw for Weaver, ph for Hemphill and jfm for Menna, appear.

Weaver’s obverse design features Lady Liberty holding the Lamp of Remembrance. Behind her are beacons of light stretching skyward. Liberty, the lamp and the light symbolize the immeasurable loss on Sept. 11, 2001, and the resiliency and triumph of those who persevered, according to the Mint. Inscriptions are always remember and the dates 2001 – 2011.

The reverse design depicts an eagle, symbolizing the strength of the survivors, the families and the nation, against a backdrop of cascading water. The flowing water is emblematic of peace, serenity, healing and the continuity of life. Inscriptions are honor and hope, stacked atop each other.

No inscription explicitly identifies the medal’s theme as the Sept. 11, 2001, terrorist attacks.

The medals are being struck on the same 1-ounce, .999 fine planchets used for striking American Eagle silver bullion coins.

The medals will bear a plain edge. ¦